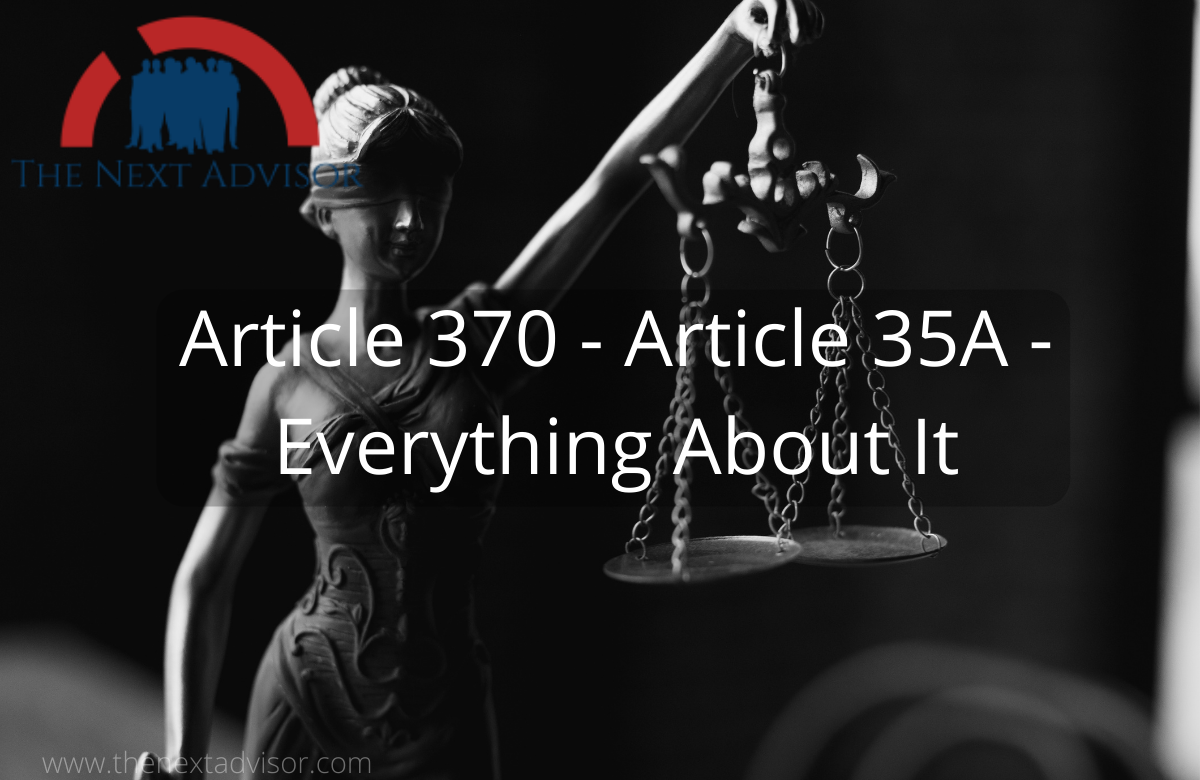 In today’s video, we will learn about the history and geography and geography of the Article 35A and 370. How and why were these articles were made? What was the main objective behind this? What was the problem that people were facing by this and why and how it is getting removed now?. An important thing is, what will be the impact after both the articles are removed? First, I will explain to you bout the timeline. In which we will understand the while events that happened after the implementation of 35A and Article 370 till August 2019 when it is removed, we will learn all about that important facts. With the help of this, you will be selfly able to draw a picture of this event in your mind that why it is discussed so widely? and why a lot of debate is going around these articles? Our timelines first and very important date is 26th October 1947.

On this day only the instrument of accession was signed between the government of India and Raja Hari Singh. From that day onwards Jammu & Kashmir became part of India. The next Important date is 1949. In 1949 the constitution of India was not yet completed. It was still in the process of writing, on 17 October 1949, Article 370 was incorporated in the constitution of India. After that comes 26 January 1950, our republic day. From this day only our Constitution was started applicable.

Now we will look at the two important Articles of the 1950 Constitution of the topic related to Jammu & Kashmir.

See whatever changes made in 35A and 370 are done through specific presidential orders. Similarly, on 14 May 1954, a specific order was passed by Dr. Rajendra Prasad, Which name was ‘The Constitution application to Jammu & Kashmir’ order 1954. From this presidential order in 1954 Article 35A was included in our Constitution. This is the Article that prohibits other Indian citizens and tells that who can be a permanent resident in Jammu & Kashmir.

Now, if the procedure of removal of article 370 was given in that article then why he has not removed that article yet? Because the constituent assembly which was discussed for the permission, that assembly was already got dissolved since 1957. Look legislative assembly and constitutional assembly are two different things. In Article 370 the matter was to be discussed with the constituent assembly, which was not in the existence. So because of this deadlock, the whole problem was coming in the removal of 370. 8830323818. Next is Article 35A. So in Article 370 for the special status for Jammu and Kashmir for fulfilling that statement in 1954, Dr. Rajendra Prasad issued a presidential order. And from there onwards Article 35A came into existence. So by which the other states were separated from Jammu and Kashmir by Article 370, like that only 35A created discrimination among the people living in Jammu and Kashmir.

Let us see how?

Firstly:- 35A says that all the laws which the states of our country follow, will not be applicable in Jammu and Kashmir.

Secondly:- 35A is that provision by which it is decided that who is the permanent resident of that state and who is not.

So now you will think that what matters is if anyone is a permanent resident or not. But it matters a lot. For stating the importance of this if I give you an example then you will come to know that the basic right to vote has not been available for the nonpermanent residents over there. And many more objections ae there which was in 35A. These provisions are very discriminating against women. This provision and constitution of J & K state that if any Kashmiri woman marries an outsider or a Non-Kashmiri then she will not be able to use her property rights anymore. But in 2002 according to the statement of Supreme Court, it is stated that the property rights of Kashmiri women will be as it is but she will not be able to transfer it to her kids. Another objection to this Article is that it acts as a speed breaker for the development over there. Because of any government jobs over there and higher education or any land, these facilities were for the people who are permanent residents over there and nonpermanent residents and other people from other states cannot avail those facilities over there.

So after all these provisions why any qualified doctor or any researcher and teacher or any specialist, Why they would prefer to go there when they know that they have to face many limitations and problems. The people who are minority and Dalit face a lot of discrimination problems because of this provision only. We can clearly see that between the integration of J & K and other states of India the hurdles which are coming across are because of these provisions only.

When the presidential order of 2019 was released, soon after that home minister Amit Shah proposed two resolutions.

Firstly:- He said that because article 370 discrimination issue is going all around, that’s why we should bring such changes in Article 370 that it would ger inoperative. Article 370 shall not be able to apply.

Secondly:- He proposed J & K reorganization bill. While proposing these resolutions the home Minister said that because of Article 370 democracy is not coming to full existence I J & K. And states development is withheld, for example, he said that the Aayushman Bharat scheme is applicable over there but why would any qualified doctor wish to go there? He already knows that if he goes their many limitations will be imposed on him.

Now see What happened with that two resolutions? Here I will explain that what happens with the first resolution of Article 370? As I write above that Why we are not able to remove Article 370 because, in Article 370 it was written that, if you remove this, first you have to take permission from the constituent assembly. And constituent assembly was not there so it was a deadlock for them. But the presidential order of 2019 finished that deadlock. The new presidential order added clause (4) in Article 367.

Therefore 4 changes were made in this. But I will explain to you the major change related to article 370.

It is the interpretation clause of Article 370. Article 370 says that the word constituent assembly is used in Article 370. From now onwards it will be known as the legislative assembly. So the deadlock of Constituent assembly was finished by this. After that we come to the 2nd resolution, J & K reorganization bill’s Section 3 says that a new Union territory will be made which will comprise the region of Ladakh (Kargil+Leh). ANd Section 4 of this says that a new Union territory named J & K will be made and it is also mentioned that, Ladhakj’s territory will be without a legislature body and Kashmiri’s will be with the legislature.

So now I explain to you What will be the impact after the removal of 35A and changes in Article 370. In place of dual citizenship, there will be single citizenship now, special status and powers are removed. No separate flag will be there only the tri-color flag will be there. Instead of a separate constitution, the constitution of India will be applicable from now. Women facing discrimination of property will now be able to transfer their properties to their children as well. The prohibition against minorities and other classes over there has also been removed. The barrier for our whole country’s unity, integrity, and democracy was because of these two articles only. And these two Articles was is for the existence for last 70 years. In the year 2019 parliament was very focused on the solution to this issue.

Neither I am getting optimistic nor pessimistic, I am only getting hopeful that whatever laws parliament is implementing and any solutions, at the end of the day, the people who had gone through a lot over there should get the benefit of this. What is happening in the ground reality is there really any improvement or not, we will come to know about it in upcoming years only.