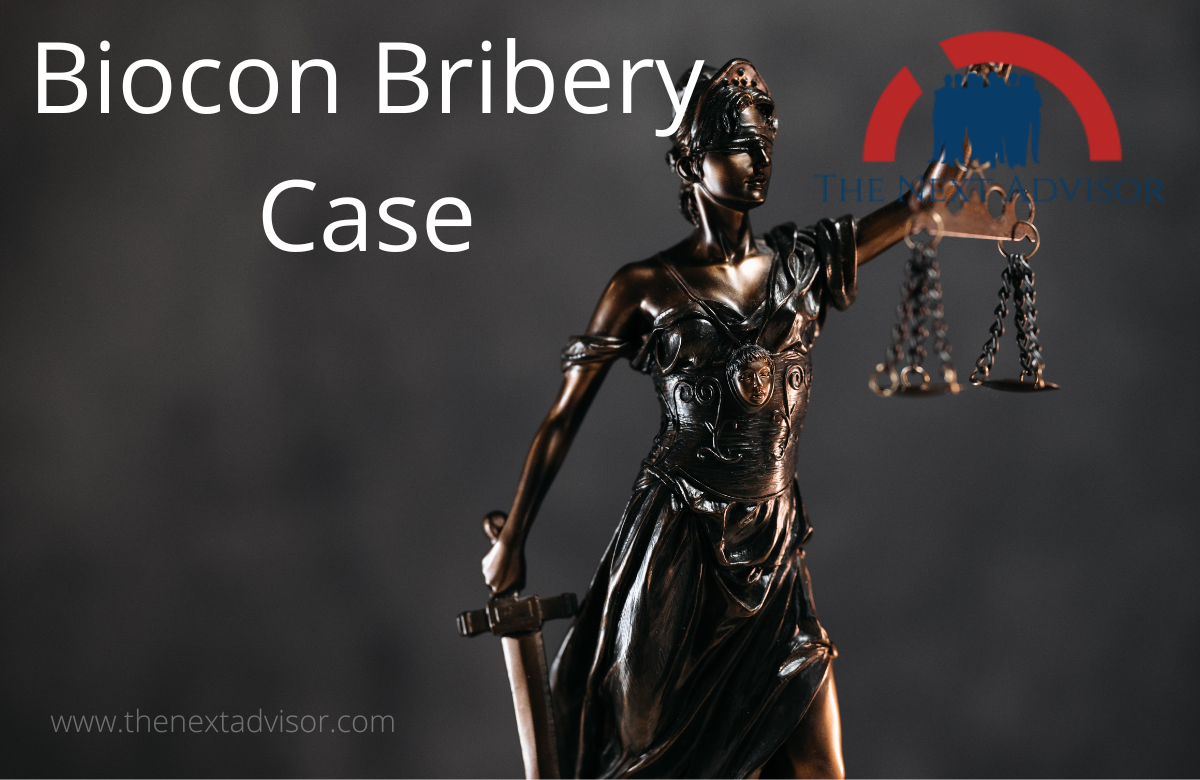 WHAT HAS HAPPENED IN BIOCON BRIBERY CASE?

The CBI last week nabbed the Joint Drug Controller ( JDC ) with the Central Drugs Standard Control Organization ( COSCO ), S Eswara Reddy, While accepting a bribe of Rs 4 lakh from a representative of a Delhi – based firm. The probe agency has alleged that the representative was paying the bribe to get some files related to Bengaluru – based Biocon Biologics Ltd cleared by the central regulatory body.

It has even arrested the Associate Vice President of the company, L Praveen Kumar. However, the Kiran Mazumdar Shaw-promoted pharmaceutical firm has denied these allegations.

ABOUT THE CASE STUDY OF THE BIOCON BRIBERY CASE

The CBI has alleged that it received information that Dinesh Dua, Director of Delhi – based Synergy Network India Pvt Ltd, Was negotiating bribes to waive Phase III trials for Biocon’s Insulin Aspart Injection among other files, And was to visit Reddy’s Chanakyapuri residence on June 20 to deliver part of the negotiated bribe amount of Rs 9 lakh.

The CBI claimed that it laid a trap and arrested both while exchanging a bribe of Rs 4 lakh. It subsequently arrested L Praveen Kumar from Bengaluru; Guljit Sethi alias Guljit Chaudhary, Director of Bioinnovate Research Services Private Limited, Delhi; and, CDSCO Assistant Drug Inspector Animesh Kumar. According to the CBI FIR, Reddy had three files of Biocon Biologics Ltd pending with him for clearance.

Sethi’s company Bioinnovate used to handle regulatory affairs of Biocon along with several pharmaceutical companies and regularly paid bribes to get regulatory clearances, the agency has claimed. Bioinnovate had business relations with Dua’s company, Synergy Network, and Dua had been asked by Sethi to allegedly bribe Reddy to waive Phase III trials of Biocon’s Insulin Aspart Injection .

WHAT WAS THE JOINT DRUG CONTROLLER’S ROLE IN BIOCON BRIBERY CASE??

According to the CBI, JDC S Eswara Reddy attended the SEC meeting on May 18 and supported for waiver of the Phase III clinical trial for the ” Insulin Aspart Injection ” of Biocon. The agency has alleged Reddy manipulated the minutes of the meeting of SEC held on May 18 changing the word ” Data ” to ” Protocol ” in the recommendations and ” thereby causing substantial wrongful gain to M / s Biocon Biologics Limited “. According to the CBI, Sethi colluded with Reddy, Animesh Kumar, and other unknown officials of CDSCO for including the third file of Biocon for the SEC Meeting on June 15 .

In Biocon Bribery Case, CBI has alleged it was on Kumar’s directions that the entire bribery operation was carried out. It has been claimed that on June 15, Praveen Kumar informed Guljit Sethi that the file of Biocon Biologics Limited had been approved in the SEC Meeting. The probe agency claims that during his meeting with Dua at the CDSO office on that day, Reddy provided his new residential address at Chanakyapuri and asked him to meet there at the end of the week .

HOW HAS BIOCON REACTED?

Rejecting the allegations, Kiran Mazumdar – Shaw said, ” We deny the bribery allegations. All our product approvals are legitimate and backed by science and clinical data. Our Aspart ) ( insulin injection ) is approved in Europe and many other countries. The regulatory process in India is online and all meeting minutes are in public domain . ” A similar statement was issued by the spokesperson of Biocon Biologics who added that the company was cooperating with the investigation agency .

WHAT’S THE STATUS OF THE BIOCON BRIBERY CASE?

Despite being a trap case where a senior official of the government has been caught accepting a bribe red-handed, the courts have not granted CBI the custody of the accused beyond one day. In fact, the lower court refused to give the custody of L Praveen Kumar to CBI even for one day after he was brought to Delhi on a transit remand from Bengaluru. All the accused are in judicial custody currently. July 2022 at an affordable price. The CBI has now approached the Delhi HC to seek their custody. The HC has issued notices to all concerned and will hear the matter next month.