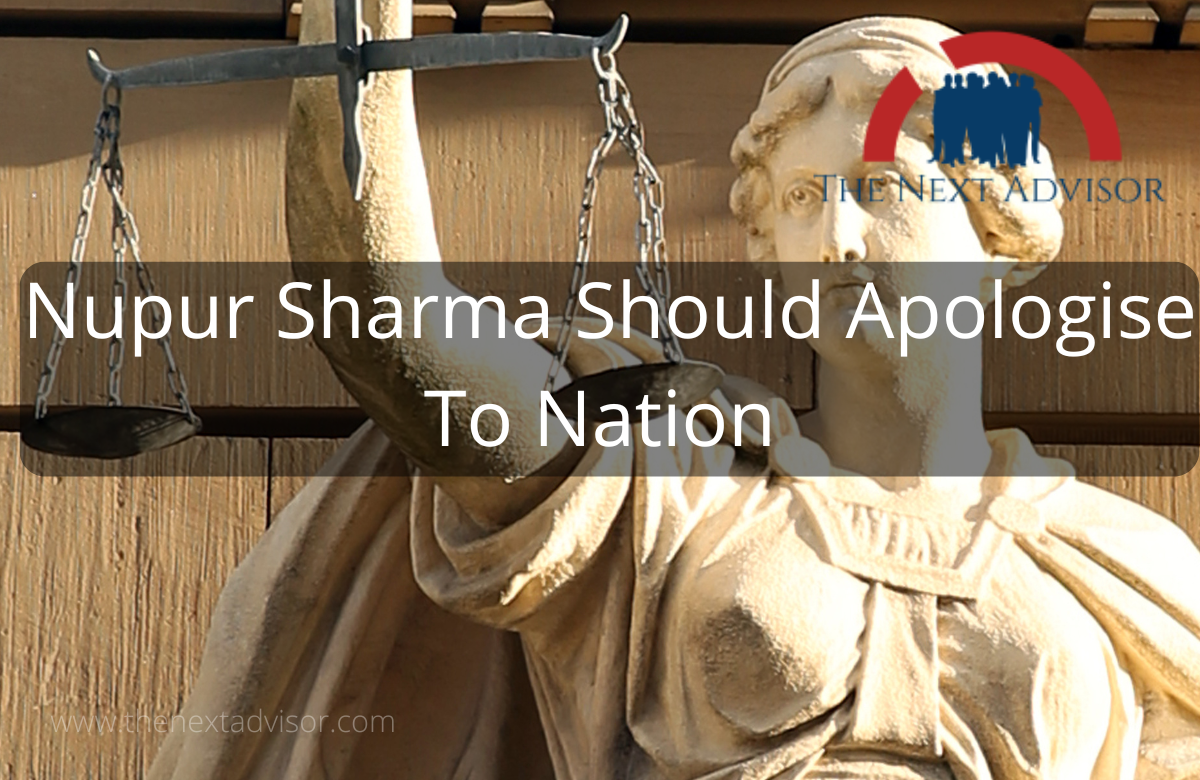 WHAT HAS HAPPENED? Why Supreme Court Said Nupur Sharma Should Apologise To Nation

JP leader Nupur Sharma is ” single-handedly responsible ” for what is happening in the country, the Supreme Court said on Friday over her comments on Prophet Muhammad. Coming down heavily on the Bharatiya Janata Party leader, the SC bench further observed that her ” loose tongue ” has not only ” set the entire country on fire “, But she is also responsible for the unfortunate incident in Udaipur.

Sharma made the controversial comments during a panel discussion on Times Now Channel on the Gyanvapi mosque issue, which is pending before the Courts. The comments made by Nupur Sharma on Prophet Muhammed in the show hosted by Times Now anchor Navika Kumar created a huge controversy. The comments even invited international condemnation with 16 Islamic nations expressing their disapproval. Following the uproar, Sharma was removed as Spokesperson and suspended from the BJP membership.

BUT WHY SUDDENLY SC IS SAYING Nupur Sharma Should Apologise To Nation ?

The Supreme Court bench made these observations when Nupur Sharma filed a transfer application in the Supreme Court. In her application, Sharma had urged to transfer all the cases against her in different states to Delhi as her ” life is in danger due to constant threats “. Nupur Sharma said that she is constantly receiving threats to kill her from different states. ” She faces threats or she has become a security threat ? ” says SC.

” The way she has ignited emotions across the country, this lady is single-handedly responsible for what is happening, ” said Justice Surya Kant. Referring to her apology and withdrawal of comments on Prophet, the apex court bench said it was too late in the day to withdraw.

” On her complaint, a person was arrested, but despite multiple FIRS, she has not yet been touched by Delhi police, ” the court added. The apex court castigated Sharma for her obstinacy and arrogance and said because she was the spokesperson of a party, ” power has gone to her head “.

These remarks are very disturbing and smack of arrogance. What is her business to make such remarks? These remarks have led to unfortunate incidents in the country. These people are not religious. They do not have respect for other religions. These remarks were made for cheap publicity or for political agenda or some other nefarious activities, the bench said during the hearing.

Calling her a complete ‘ loose tongue ‘, the Supreme Court said, ” She makes all irresponsible statements and claims. to be a lawyer of 10 years standing. 10 She should be apologizing to the whole country. “

Pulling up Delhi Police and the TV channel hosting the debate, the bench asked, ” What has Delhi police done? Don’t make us open our mouths, what was the TV debate about? Only to fan an agenda? Why did they choose a sub – judice topic? “

While refusing to entertain Sharma’s plea for clubbing of FIRS lodged in various states against her for the remark, The vacation bench of Justices Surya Kant and JB Pardiwala allowed her to withdraw the plea.

Where did India get its concept of Single order of court?

D ) None of the above