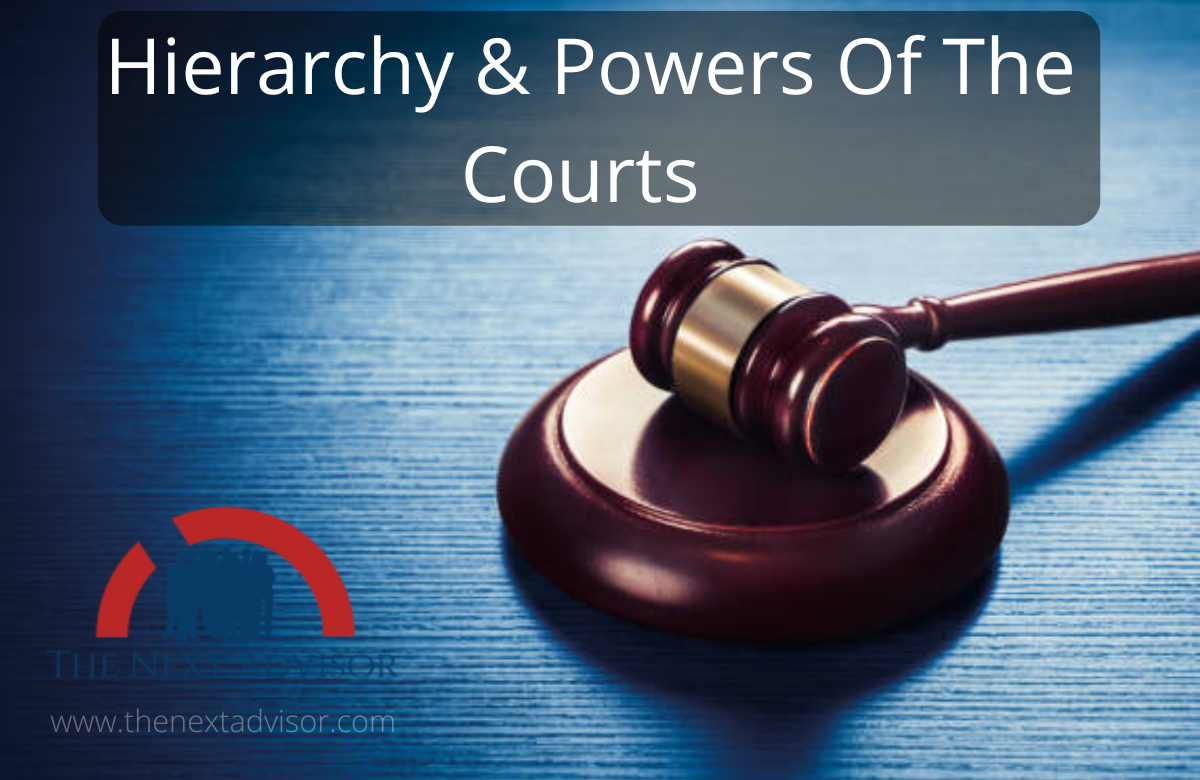 INTRODUCTION of Hierarchy & Powers Of The Courts

Indian Judiciary is one of the most efficient Judicial systems in the world. The Judiciary derives its powers from the Constitution of India. The existence of Courts is required to check the misuse of the powers conferred by the Legislature or the Executive. The Indian Judiciary is the guardian of the Constitution of India, along with being a custodian of the Fundamental Rights of the citizens. The Judiciary is well established with quite a lengthy and complex hierarchy of courts or quite lengthy and complex Hierarchy & Powers Of The Courts.

The judicial system has been established in such a way that it caters to the need of each and every person in the country. The Judicial system in India is in the form of a pyramid, with the Supreme Court being at the top of the hierarchy. The hierarchy has been created in a manner that it is possible for a person even from a remote area to approach the courts to get their disputes resolved. The system is well equipped to deal with issues of the Union as well as State laws.

Let us see the Hierarchy & Powers Of The Courts

The Supreme Court of India, being the apex court of India, was established under Article 124 of Part V and Chapter IV of the Constitution of India.

The high courts are at the second level of the hierarchy. They are governed by Article 141 of the Constitution of India and are bound by the judgment of the Apex Court.

Hierarchy & Powers Of The Courts

Section 9 of the CrPc talks about the establishment of the Sessions Court. The State Government establishes the Sessions Court which has to be presided by a Judge appointed by the High Court. The High Court appoints Additional as well as Assistant Sessions Judges. The Court of Sessions ordinarily sits at such places or places as ordered by the High Court. But in any particular case, if the Court of Session is of the opinion that it will have to cater to the convenience of the parties and witnesses, it shall preside its sittings at any other place, after the consent of the prosecution and the accused. According to section 10 of the CrPC, the assistant session judges are answerable to the session judge.

These are appointed by the High Court of a particular state. They are responsible for cases relating to murders, theft, dacoity, pick-pocketing, and other such cases in case of absence of the Sessions Judge.

According to section 20 in every district and in every metropolitan area, an Executive Magistrate shall be appointed by the State Government and one of them becomes District Magistrate.

Federal Court- Article 131 gives the power of original jurisdiction to the Supreme Court, to resolve the dispute arising between the Centre and the States or between two States .

Power Of Judicial Review ( Article 137 ) – All the laws enacted are subjected to scrutiny by the Judiciary.

Court of Appeal – The apex court is the highest court for appeal in India. It has the power to hear appeals from all the cases lying in the various High Courts and subordinate courts of our country.

Original Jurisdiction – In some issues, the case can be directly filed in the High Courts. This is known as the original jurisdiction of the High Court. E.g., In matters related to fundamental rights, Marriage, and Divorce cases.

Appellate Jurisdiction- The High Court is the Appellate Court for the cases coming up from the trial court.

Supervisory Jurisdiction- This refers to the power of general superintendence of the High Court over the matters of all the subordinate courts.

The Second Class Magistrate may pass a sentence of imprisonment for a term, not more than one year, or fine, or both. The fine imposed cannot exceed five thousand rupees.

CONCLUSION in Hierarchy & Powers of Courts

The Hierarchy  & powers of Courts has been developed in such a manner that it becomes easy for everyone who is living in this country to knock on the doors of the courts whenever a dispute arises. It provides a platform for the citizens for appealing to higher courts, in case they feel that justice has been denied to them by the lower courts. India is a country with a huge population in it. Therefore, it needs this existing system of Judiciary to prosper and makes its process easier, so that people can approach it easily so that Justice is given to all citizens of this country.