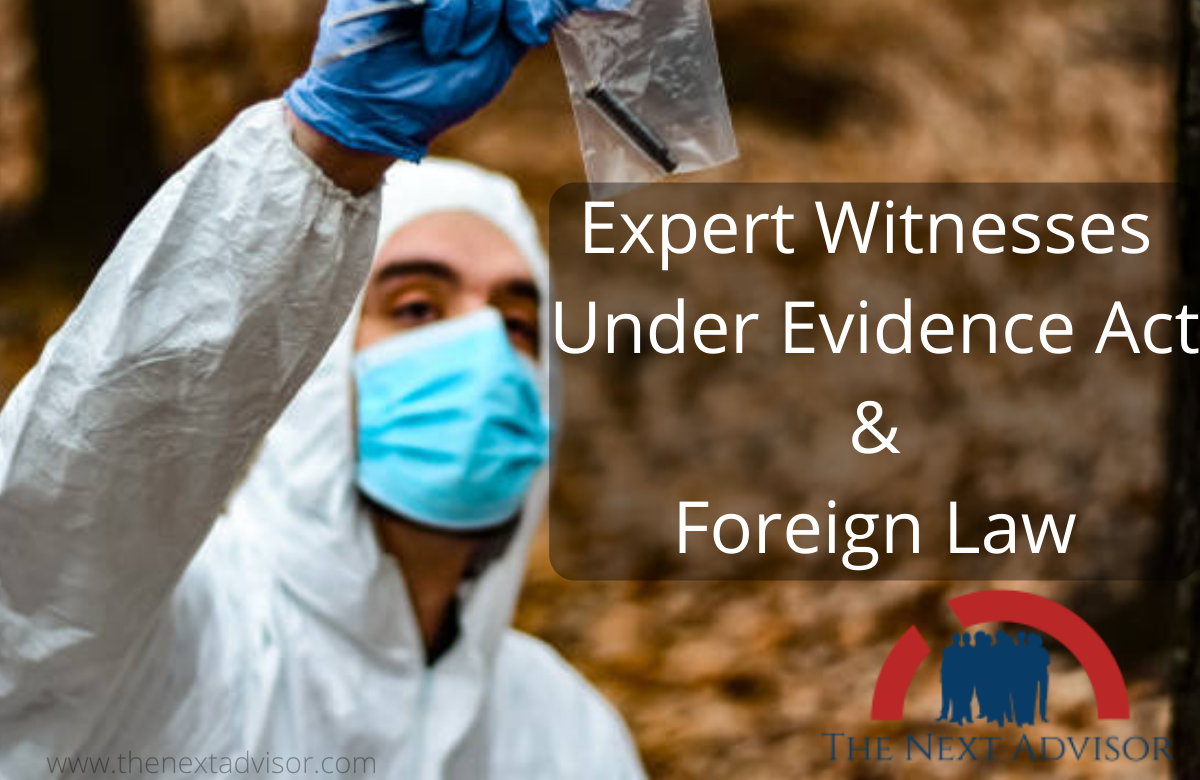 Generally, when a person is summoned to court for giving testimony as a witness, he is expected to state only facts and not to give any opinion. It is the job of the court to form an opinion in the case. Moreover, if a person is asked to give his testimony then it is expected that the person must be factually related to the case not merely a third party.

But there is an exception to this rule. The experts are considered witnesses although they are not actually related to the case. The court requires these experts to give an opinion regarding the case to help the court in having a wider perspective to give justice. The rationale behind the same is that it is not practical to expect the Judges to have adequate knowledge of medical issues. The statutes regarding the experts’ opinion are discussed in The Indian Evidence Act, 1872.

Who Is An Expert in Expert Witnesses Under Evidence Act & Foreign Law?

The court cannot form a correct judgment without the help of a person with special skills or experience in a particular subject. When the court needs an opinion on a subject that requires special assistance, the court calls an expert, a specially skilled person. The opinion given by a third person is considered as relevant facts if the person testifying is an expert. The word Expert in Expert Witnesses Under Evidence Act & Foreign Law is defined under section 45 of The Indian Evidence Act, 1872. The court needs an expert to form an opinion upon

The disposition or temper of animals Colour, weight or scale of similar facts Age of a person If a man or women were intimate If a person was intoxicated or not.

If an expert is giving an opinion, it is considered as a relevant fact font the case. An expert has devoted his time in learning a special branch of expertise and thus is especially skilled in the subject. It can include: – Superior knowledge, and Practical experience

In the case of Ramesh Chandra Agrawal vs Regency Hospital Ltd. & Ors., the court stated that the first and foremost requirement for expert evidence to be admissible is that it is necessary to hear the expert evidence. The test is that the matter is outside the knowledge and experience of the layman.

•A person who is an expert in this field

•A person who has actually seen someone writing, or

•A person who regularly receives letters or papers which are written by that person.

• The evidence of the writer himself. This is mentioned in section 60 of the act.

• If another person admits that the documents were written by him. This is mentioned in section 21 of the act.

•A person who has seen the person writing or signing. This is mentioned under section 60 of the act.

• When the court himself compares the document in question with any other document which is proved genuine in the court. This is mentioned in section 73.

• The court may ask the person to write something for the court to compare with the document in question.

When there is a law prevailing in any foreign country which needs to be considered for giving judgment in any case, the court needs an expert who is well versed with that law. Otherwise, the court can take an opinion from a law book that contains the answer regarding any foreign law. These books must be printed or published under the authority of the government of that country.

Generally, finger impression expert’s opinion is given more value because The fingerprints of any person remain the same from their birth till death, and No two individuals’ are ever found to have the same finger impressions Footprint studies are gaining importance nowadays but the courts have been reluctant to accept that as a piece of evidence. A person, who is a fingerprint expert, is called to match two or more fingerprints, then the opinion of such an expert is relevant and admissible in the court.

Opinion on Science or Art

The words ‘Science and Art’ are to be broadly constructed. The term ‘science’ is not limited to higher sciences and the term ‘art’ is not limited to fine arts but has its original senses of handicraft, trade, profession, and skill in work. Science and Art signify the activities which include the fields which require special knowledge or expertise to form an opinion. Before designating that a person is an expert, it needs to be checked that the field or the matter on which we are seeking the opinion should not be something that can be easily understood by laymen or court without any special knowledge or skill.

About Opinion of Medical Expert in Expert Witnesses Under Evidence Act

Opinions of a medical officer can be used to prove:

1) The Physical condition of the person,

3) Cause of death of a person

5) Manner or instrument by which such injuries were caused

6) Time at which the injury or wounds have been caused.

7) Whether the injury or wounds are fatal in nature

8) Cause, symptoms, and peculiarities of the disease and whether it is likely to cause death

Ballistic experts, also known as firearms experts are people who are experts in the study of projectiles and firearms. Their help is taken in cases say where guns are involved. A ballistics expert may trace a bullet or cartridge to a particular weapon from which it was discharged. Forensic ballistics may also furnish opinions about the distance from which a shot was fired and the time when the weapon was last used.