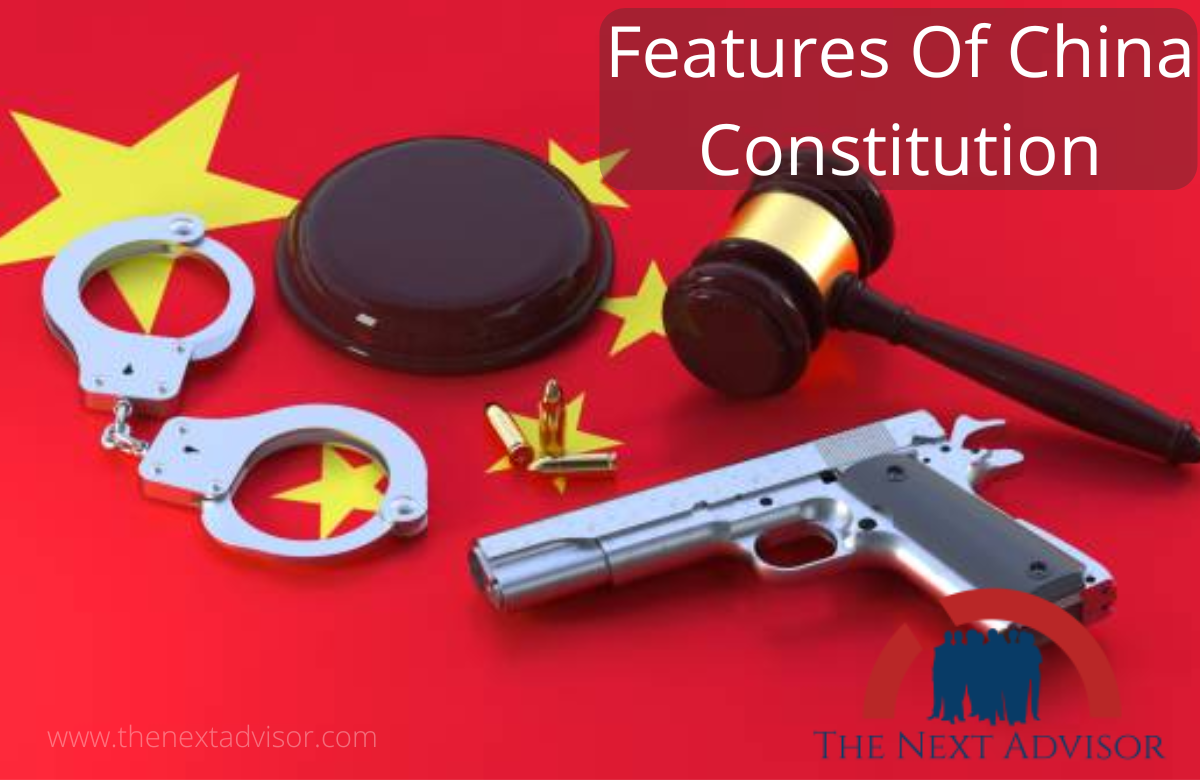 1. Preamble It affirms that the ” constitution of Chinese society from a new democratic to socialist was effected “. It enshrined that China will concentrate its efforts on social modernization through hard work & self-reliance.

2. Written & enacted constitution It was drafted by the National Constitution revision committee, discussed by the standing committee & the people & passed by the NPC ( National People’s Congress ) on 4th December 1982. It contains 138 articles, divided into 4 chapters

3. Faith in Panchsheel and opposition to Imperialism

Chinese constitution opposes imperialism, and colonialism & supports the oppressed nation in their just struggle to win & preserve their national independence.

4. Constitution as the Supreme Law –  The Constitution of the People Republic’s of China is the fundamental law of the state. It has supreme legal authority. The Constitution can only be amended by a 2 / 3rd majority of the vote in the National People’s Congress.

5. Parliamentary System – The 1982 Constitution lays down a system of government that resembles the Parliamentary system. The Cabinet is called State Council & PM is called the Premier ( real head ). He is chosen by NPC. All other members of the State Council are appointed by NPC. Top leaders of CPC are also its members.

6. Faith in the Sovereignty of the Popular will – All powers in china belongs to the people. The people administer state affairs and manage economic, cultural, and social affairs in accordance with the law. Article 5 states that ” All state organ, the armed forces, political parties, the public organization must abide by the Constitution & law.

7. Unitary system The 1982 Constitution like the previous ones ( 1954.1975.1978 ) provides for a unitary system. It provides for the centralization of powers at the Centre. Though there are provinces autonomous regimes and municipalities, they are given powers by the Central Government, which can be taken always whenever it is so desired.

8. Unicameral Legislature The constitution of the People’s Republic of China declares that there will be a unicameral legislature to be known as the National People’s Congress ( NPC ). It is the highest organ of the state power and the sole legislative assembly of China. It is the repository of all powers and authority in the country and people exercise their powers through it. Its deputies are directly elected by the people.

9. Fundamental Rights and Duties Articles 33-56 of Chapter II of the constitution give a detailed description of the fundamental rights and duties of the citizens. The individual’s rights include the right to vote, freedom of religion, freedom of speech, freedom of the press, freedom of assembly, freedom of association, freedom of procession, and of demonstration. The state also protects the right of citizens and their lawfully earned income savings, house, property, and also his right to inherit property. The important duties include safeguarding the unity of the country, abiding by the laws of the constitution, defending the motherland, and resisting aggression, to perform.

These are some important Features Of the China Constitution.