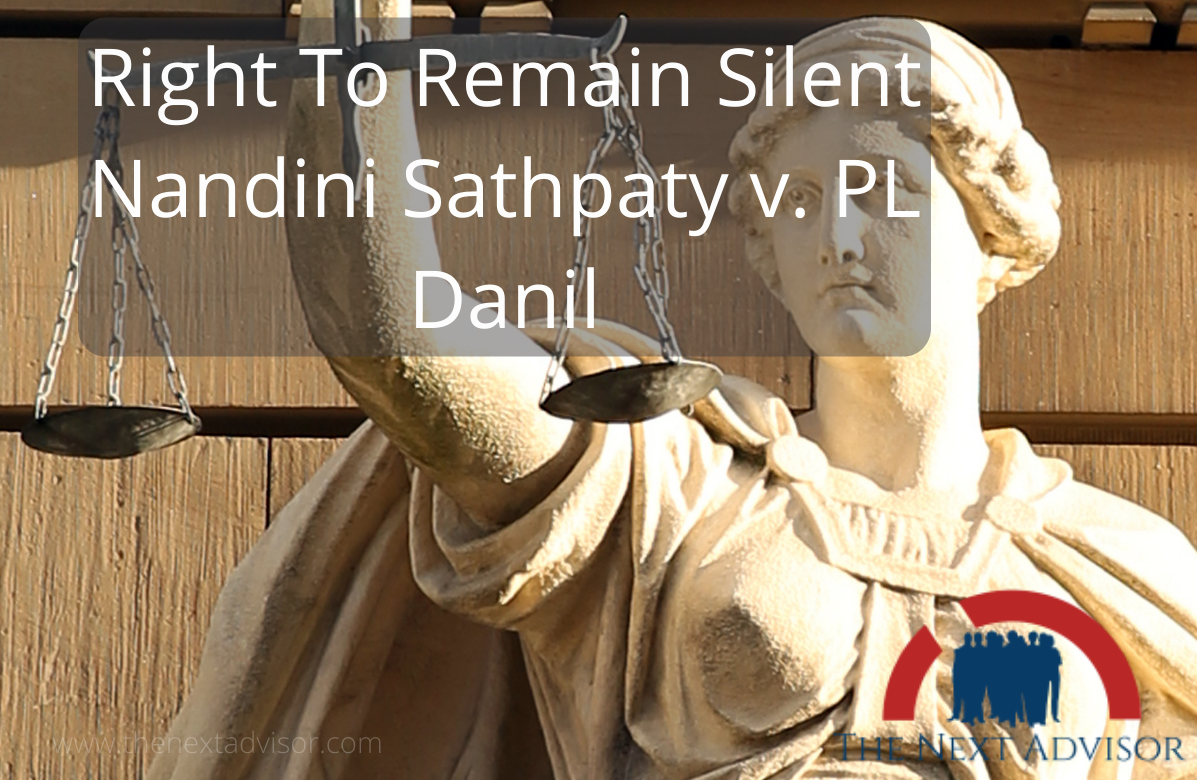 The former Chief Minister of Orissa Nandini Sathpathy was instructed to appear before the Police in Cuttack with regard to a vigilance case against her. She was provided with questions in relation to her alleged acquisition of disproportionate assets. She thereafter exercised her right under Article 20 (3) of the Constitution and refused to answer the questions.

Article 20 (3) of the Indian Constitution, Guarantees a Fundamental Right, is known as Doctrine of Self Incrimination. That no person shall be compelled to be a witness against himself or herself. Article 20 (3) gives us the Right to Remain Silent.

She challenged a magistrate’s decision to issue her summons of appearance stating that Article 20 (3) and immunity Under Section 161 (2) of the Criminal Procedure Code ( not bound to answer questions that expose her to a criminal charge ) were wide enough to shield her. And she said that Right to Remain Silent is a Fundamental Right.

Such person shall be bound to answer truly all questions relating to such case put to him by such officer, other than questions the answers to which would have a tendency to expose him to a criminal charge or to a penalty or forfeiture.

When the High Court refused to entertain her Petition she appeal to the Supreme Court of India.

What were the questions before the Supreme Court?

The Court took a considerably wide view of the scope of Article 20 (3) holding that its prohibitive scope extends not only to the procedure in Court but also at the stage of the investigation. The ban on Self – Accusation is not confined to the offense regarding which interrogation is made but extends to other offences about which the accused has a reasonable apprehension of implication from his answer. Guarding against involuntary Self – Crimination in the face of pressure from Police officers, the Court found compelled testimony violative of Article 20 (3).

It read, Compelled testimony to mean evidence procured not only by physical threats and violence but also as psychic torture. Atmospheric pressure, environmental coercion, tiring interrogative proximity, overbearing and intimidatory methods. It also held that legal perils following upon refusal to answer or answer truthfully, cannot be regarded as compulsion within the meaning of Article 20 (3) of the Indian Constitution.

Article 20 (3) of the Constitution – (Right to Remain Silent)

The Court suggested the presence of a lawyer during the course of interrogation, as a solution to the problem of self – crimination secured through secrecy or coercion.

Now the question before Honourable Apex Court is whether the Mens rea is the essential element or not?

Mens rea is an essential ingredient of Section 179 of the Indian Penal Code ( refusing to answer public servant authorized to question ) Although an offence cannot be made under it in case there is an apprehension of implication on answering the questions put forth by the public authorities, an accused cannot deny to do the same on unreasonable and vague apprehensions and possibilities.