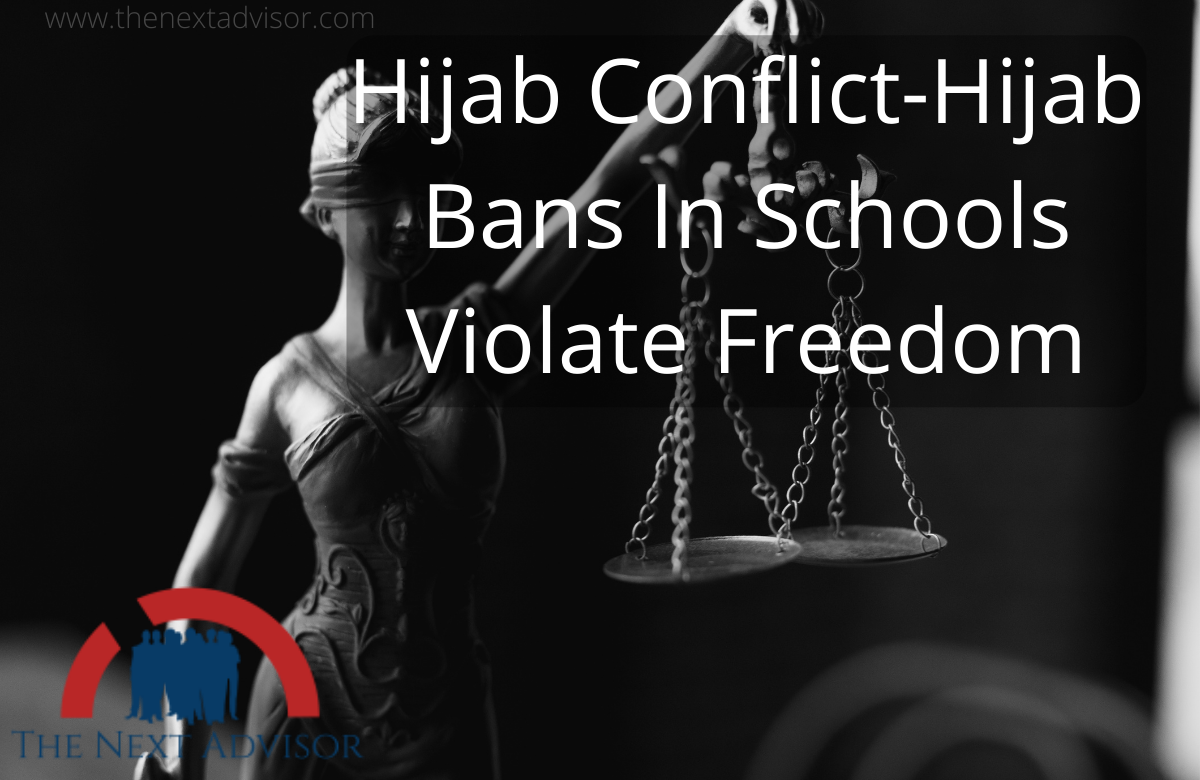 The Hijab Conflict is a very big topic all over the world. US government also commented on it. let us discuss exactly what happened in it. You should know that till the final decision of the Hijab conflict, Karnataka Court banned religious dresses in the school and colleges. Some conflicts say that Hijab Ban violates the Fundamental Right which is given in Art. 25 of the Indian constitution.

Article 25 of the Constitution guarantees to all persons the right to freedom and conscience and the right freely to profess, practice, and propagate religion subject to public order, morality, and health.

6 girl students study in a college in Karnataka. They have filed a petition in the High Court that it is their right to wear a hijab and go to school and college in wearing it. On behalf of these four girls, one De Saheb is pleading in the court.  These six girls say no one can stop them from wearing the hijab.

The matter started to because, in Government PU College of Women, situated at Udupi, Karnataka, girls were stopped from coming to their college wearing Hijab. So these 6 students refused to accept this decision of the college and filed a petition against it in the High Court.

US government body that monitors and reports on religious freedom abroad has criticized Karnataka amid the row over Muslim students’ demand for wearing hijab on campus.

Rashad Hussain, the Ambassador at Large for International Religious Freedom, or IRF, tweeted ” hijab bans in schools violate religious freedom “, Referring to the controversy in Karnataka that has prompted the state government to keep schools and colleges shut till the high court completes looking into petitions on the hijab ban.

Amb. at Large for International Religious Freedom(tweet of Rashad Hussain)

The Ministerial to Advance Religious Freedom of which Mr. Hussain is an ambassador comes under the US Office of International Religious Freedom, which has in the past commented on tensions along religious lines in India.

This came on a day when External Affairs Minister S Jaishankar met US Secretary of State Antony Blinken in Melbourne on Friday and the two leaders reviewed the efforts to strengthen cooperation bilaterally and through the Quad grouping in the strategic Indian Ocean region.

Born in the US, Rashad Hussain’s father belonged to Bihar. He studied at Yale Law School and also earned his Master’s degrees in Public Administration (Kennedy School of Government) and Arabic and Islamic Studies from Harvard University.

Hussain, who had served as US Special Envoy of President Barack Obama to the Organization of Islamic Cooperation (OIC), was recently appointed as the US envoy for international religious freedom by the Biden administration.

He is the first Muslim Ambassador – at – Large for IRF.

WHAT KARNATAKA GOVT DID?

On February 5, the Karnataka government passed an order exercising its powers under Section 133 ( 2 ) of the Karnataka Education Act, 1983.

The provision grants powers to the state to issue directives for government educational institutions to follow. In 2013, under this provision, the state had issued a directive making uniforms compulsory for education institutions.

The order takes refuge in three cases decided by different High Courts to hold that banning the headscarf is not violative of fundamental rights, particularly freedom of religion.

All students, regardless of religion or faith, are restrained from wearing ” saffron shawls ( Bhagwa ), scarves, hijabs, religious flags within classrooms “, A full bench of the Karnataka high court has ruled in an interim order that it said is applicable only to those institutions that have prescribed a dress code or uniform.

A three-judge bench of the Karnataka High Court heard arguments on the petitions requesting Muslim girls’ hijabs to be allowed to attend school, but surprisingly, refused to pass an interim order allowing the girls to attend classes wearing their headscarves until final adjudication.

The bench of Chief Justice Ritu Raj Awasthi and Justices Krishna Dixit and JM Khazi passed an interim order prohibiting any student from wearing any religious clothing while they consider the legal issues involved.

WHY HC GAVE THIS DECISION?

Senior advocate Sanjay Hegde had earlier made impassioned arguments on why an interim order protecting the girls ‘ freedom of conscience was required till a final decision was made.

” Freedom of conscience is also part of Article 25. Having taken a conscientious decision to wear the headscarves, can the girls be made to go back to school without it, ” he had asked. ” This is not just a case of essential religious practice, it is a case of essential education for the girl child, ” he added.

However, the Advocate General, representing the state government, insisted that there should be no interim order allowing the girls to wear hijabs to their classrooms. And by the end, the Chief Justice went by this logic, saying that institutes had to reopen, and this was the best solution .

Let me tell you that the protest against this Hijab Ban is seen in various places of India. Hijab protests spread in India as girls refuse to be told what not to wear.