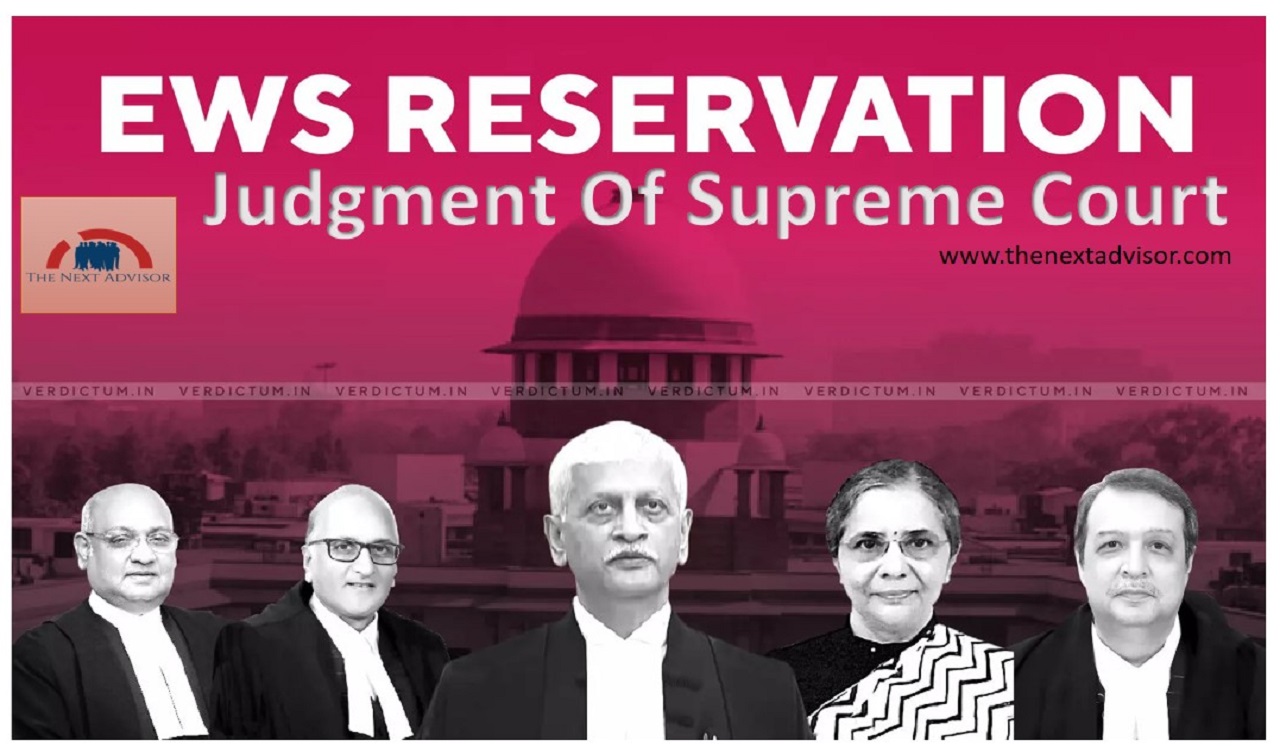 EWS Reservation Judgment of the Supreme court is a landmark judgment. For more details please refer to EWS Category Clarification By DOPT

The 103rd Amendment of 2019 inserted Articles 15(6) and 16(6) in the Constitution to provide 10 percent reservation to EWS other than backward classes, SCs, and STs in higher educational institutions and initial recruitment in government jobs.

The rationale was that the Amendment could empower state governments to provide reservations based on economic backwardness- determined by criteria such as land size owned, annual income, etc.

Article 15 prohibits discrimination on grounds of religion, race, caste, sex, or place of birth. Article 16 guarantees equal opportunity in matters of public employment. The additional clauses gave parliament the power to make special laws for EWS as it does for SCs, STs, and OBCs. The EWS reservation was granted based on the recommendations of a commission headed by Major General (retd) S R Sinha.

The Supreme Court has upheld the 103rd constitution amendment, providing a 10 percent quota for the economically weaker sections (EWS) from unreserved categories. The beneficiaries can avail of the quota for admission to central institutions and central government jobs. A five-judge constitution bench of Chief Justice UU Lalit and Justices Dinesh Maheshwari, S Ravindra Bhat, Bela M Trivedi, and JB Pardiwals, in a 3-2 verdict, held that the provisions of the concerned amendment are not in violation of the constitution.

At the outset, Chief Justice UU Lalit said there are four different judgments on pleas challenging the EWS quota. Reading out the verdict, Justice Maheshwari said that the 103rd Constitutional amendment is valid and does not violate the basic structure of the constitution. Justice Trivedi said that there is a need to revisit the reservation policy and it should have a period.

What is EWS Reservation?

The 103rd Amendment of 2019 inserted Articles 15(6) and 16(6) in the Constitution to provide 10 percent reservation to EWS other than backward classes, SCs, and STs in higher educational institutions and initial recruitment in government jobs. The rationale was that the Amendment could empower state governments to provide reservations based on economic backwardness- determined by criteria such as land size owned, annual income, etc.

justice Pardiwala, while holding the amendment valid, observed that reservation cannot go on indefinitely and agreed with Justice Trivedi on a need to re-examine the reservation policy. However, Justice Bhatt disagreed with the majority verdict and said leaving out the poor from SCs / STs / OBCs from availing the reservation benefit under the EWS category is discriminatory. CJI UU Lalit, the last to speak, also dissented from the majority verdict while agreeing with Justice Bhatt.

Majority View of the EWS Reservation Judgment:- Justice Dinesh Maheshwari stated the there were three main issues in the case:-

1. Whether the 103rd constitution amendment is violative of the basic structure for providing reservation solely based on economic criteria.

2. Whether the amendment is violative of the basic structure for excluding the poor among the SC/ST/OBC categories from EWS Quota.

3. Whether the amendment is violative of the basic structure for breaching the 50% ceiling limit.

” Reservation is an instrument of affirmative action by the State to ensure an all-inclusive approach. It is an instrument not only for the inclusion of socially and educationally backward classes…Reservations for EWS do not violate basic structure on account of 50% ceiling limit because ceiling limit is not inflexible, ” the majority judgment by Justice Maheshwari said.

Justice Trivedi in her judgment said that the State has come out with an amendment for the advancement of EWS categories. She observed, “The impugned amendment has to be treated as affirmative action by the Parliament for the benefit of EWS class. It cannot be said to be an unreasonable classification…Treating EWS as a separate class would be a reasonable classification.”

In their dissenting judgment, however, Chief Justice of India UU Lalit and Justice S Ravindra Bhat said that reservation on economic criteria is per se not violative. However, by excluding the poor among SC/SC/OBC from economically backward classes (on the ground that they have enjoyed benefits), the 103rd Amendment practices constitutionally prohibited forms of discrimination.

They said, ” Our constitution does not permit exclusion and this amendment undernmi9nes the fabric of Social Justice and thereby the basic structure. This amendment is deciding us to believe that those getting social and backward class benefits are somehow better placed. This court has held in EWS Reservation Judgment that 16(1) and (4) are facets of the same equality principle. The characterization of excluding the poor of SEBCs is incorrect.”

They also opined against breaching the 50% ceiling in matters of reservation. He said ” Permitting a breach of 50% would result in compartmentalization.