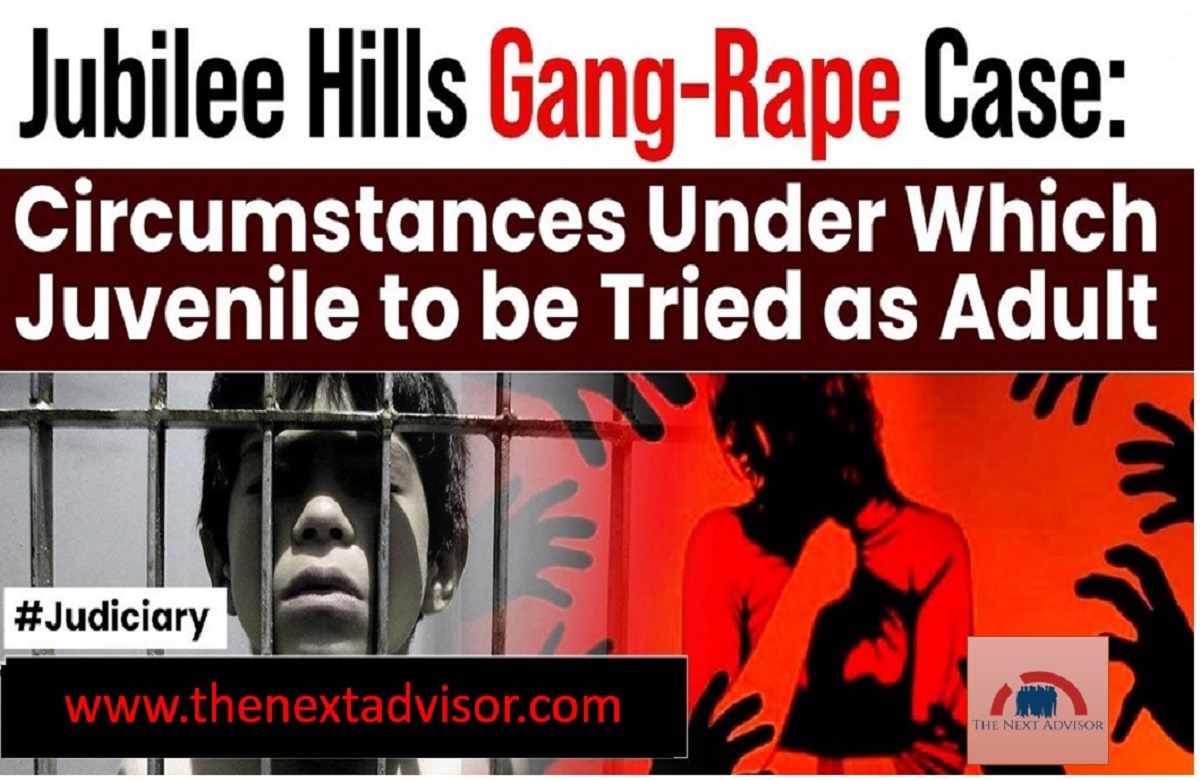 The 17-year-old minor, who was returning from a pub, Jubilee Hills Gang Rape Case on May 28, 2022, by the five suspects and molested by another minor from the same group. The incident happened at an isolated place in the Innova car. The investigation officers submitted the petition to the JJ board that the minors aged between 16 and 17 tears, had committed a heinous and grave crime and that they were mature enough to be tried as adults. The board tool assistance of the mental health experts.

The magistrate too interacted separately with the juveniles to assess their mental and physical capacity to commit the alleged offense. As per Bord’s observation, the juveniles have a good understanding of the consequences of the offense and they were not under influence of alcohol or other substance.  The magistrate in the order said the Board is of the juvenile be tried as adults having to the gravity of the offense alleged. under the Indian Constitution, Articles 15(e), 39(e), 39(f), 45, and 47 impose a constitutional obligation on the state to ensure that all the needs of the children are fulfilled and their basic rights are protected.

It allows for juveniles in conflict with the law in the age group of 16-18, involved in Heinous Offences, to be tried as adults.  The amendment was proposed by the Women and Child Development in 2014 in the backdrop of the gang-rape of a woman inside a bus in Delhi in 2012, leading to her death.

Petty offenses – Maximum, Punishment under the IPC or any other law for the time being in force is imprisonment of up to three years.

Serious offenses – Punishment under the IPC or any other law for the time being I force, is imprisonment between three to seven years.

In case of a heinous offense alleged to have been committing a child, who had completed or is above the age of sixteen years, the shall conduct a preliminary assessment about his mental or physical capacity to commit such offense, ability to understand the consequences of the offense and the circumstances in which he allowed committed the offense, and may add an order by provisions of subsection (3) of section 18.

Where the board after preliminary assessment under section 15 passes an order that there is a need for a trial of the said child as an adult, then the Board may order the transfer of the trial of the case to the children’s Court having jurisdiction to try such offenses. Provided the for such an assessment, the Board may take the assistance of experienced psychologists or psycho-social workers, or other experts.

Explanation – For the section, it is clarified that preliminary assessment is not a trial, but is to assess the capacity of such a child to commit and understand the consequences of the alleged offense.