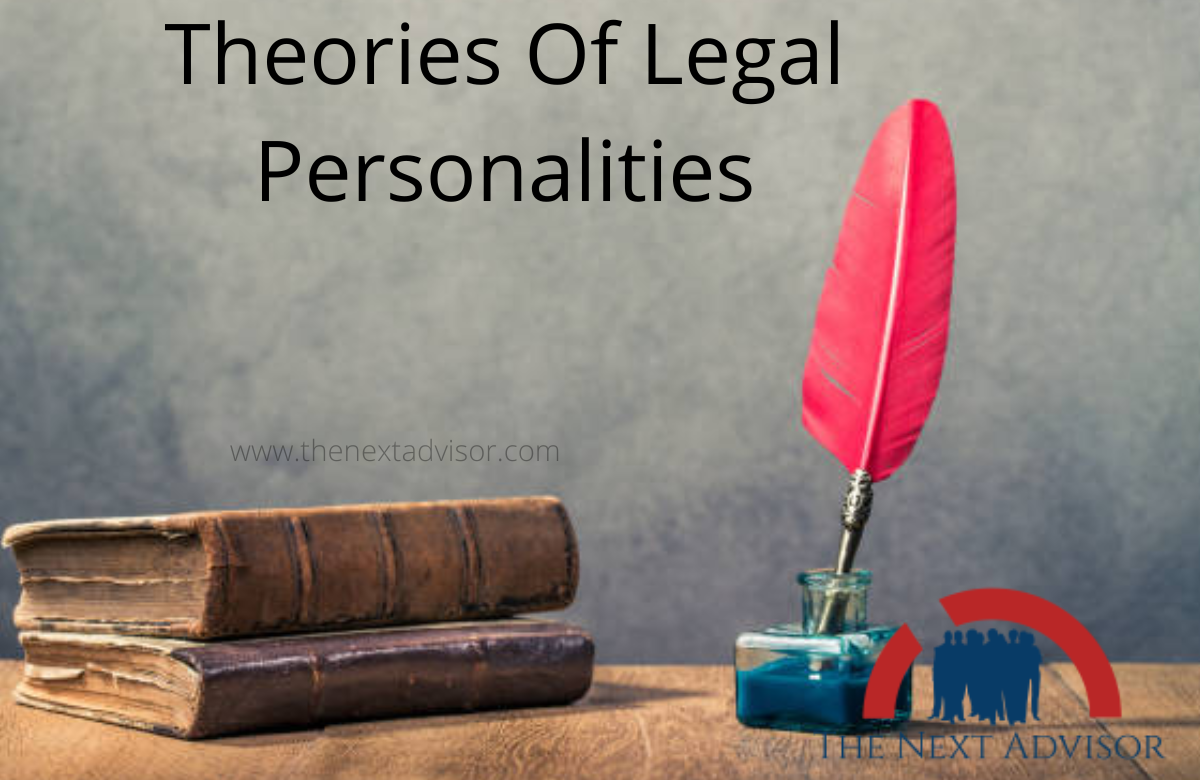 There are Five theories of legal personality, Let us see them one by one.

1. Purpose Theory: This theory was originally propounded by German Jurist Brienz and was developed in England by Barker. According to this theory, a person is applicable only to Human Beings, and they are the subjects of rights and duties. It declares that only human beings can be a person and have rights. Corporations are not human, they can merely be regarded as a juristic or artificial person.

Under this theory, the juristic person is no person at all but merely as a ” subject less ” property destined for a particular purpose and that there is ownership but no owner. This theory has been recognized in Germany but the English Courts did not approve of this theory.

Originally propounded by German jurist Brinz and developed in England by Baker. Similar to the Fiction and concession theories, it declares that only human beings can be a person and have rights. A juristic person is no person at all but merely a ” subjectless property destined for a particular purpose and that there is ownership but no owner.

The juristic person is not constructed around a group of people but based on the object and purpose. The property of the juristic person does not belong to anybody but it may be dedicated and legally bound by certain objects.

Expounded by von Savigny. Dicey and Salmond are found to support this theory. Savigny holds that the sovereign and the individual are the only realities. The identification of ‘ law ‘ with ‘ state ‘ is necessary. for this theory but not for the fiction theory. A logical consequence of this theory would be that a company incorporated in America would not be recognized as a legal person unless it is specifically granted concession in India. No such corporation has any claim to recognition as a ‘ person’.it is a matter of discretion of the state.

The state is considered to be on the same level as the human being and as such, it can bestow on or withdraw legal personality from other groups and associations within jurisdictions as an attribute of its sovereignty. Hence, a juristic person is merely a concession or creation of the state.

Often regarded as the offspring of fiction theory. It is obvious that While the fiction theory is ultimately a philosophical theory that corporation is merely a name and a thing of the intellect, the concession theory is indifferent as regards the question.

3. Bracket or Symbolist Theory: The Bracket theory was set up by Ihering and later developed particularly by Marquis. According to this theory, the juristic personality is only a symbol to facilitate the working corporation. Only the member of the corporation is the ” persons ” in the true sense and around them, a bracket is put to indicate that they are to be treated as one unit when they have formed themselves into a corporation.

Also known as symbolism theory. set up by IHERING and later developed particularly marques de vareilles sommières . This theory is similar to the fiction theory in that it recognizes that only human beings have the interests and rights of a legal person.

A corporation is only a legal device or formula which will enable very complex jural relations to be comprehended more simply or otherwise the members of the corporations as the bearers of the rights And being bound by the duties are for convenience. convenience referred to the corporation itself. A, B, and C form a company, as it is inconvenient to refer always to all of them, a bracket is placed around them to which a name is given but in order to understand the real position, we must remove the bracket.

One of the advantages of this theory is that it emphasizes that it may be necessary for the law to look beyond the entity to discover the real state of affairs. But while ultimately we may regard legal personality as merely a convenient device of the law, nevertheless it is a very important device, for it set up a new unit and make possible a clear distinction b / w the property, rights, and duties of the corporations on the one hand and of

4. Realist Theory: The founder of this theory was a German jurist, Johannes Althusius. According to this theory, a legal person is a real personality in an extra juridical and pre-judicial sense of the word. It also assumes that the subjects of rights need not belong merely to human beings but to every being which possesses a will and life of its own. As such being a juristic person and as ‘ alive ‘ as a human being, a corporation is also subjected to rights. Founded by German jurist, Johannes althusins has been most prominently advocated by Otto Von Gierke.

Holds that group or institution has an existence beyond the aggregate of the individual or persons forming the group. Subjects of rights need not belong merely to human beings but to every being which possesses a will and life of its own. This theory says a corporation is nothing more than the aggregate of its members conceived as unity and this unity- the organization of human beings – a real.

Person and a living organism capable of actions. As such being a juristic person and as ‘ alive ‘ as a human being, a corporation is also subjected to rights. A corporation exists as an objectively real entity and the law merely recognizes and gives effect to its existence.

The real jurist also contended that the law has no power to create an entity but merely has the right to recognize or not to recognize an entity. A corporation from a realist perspective is a social organism. while a human is regarded as a physical organism. There may be very real analogies to human Personality in the life of a nation, a group, or a university, but a one-man company or a foundation seems far removed. According to Salmond, the realist theory is inapplicable to the corporation’s sole.

They fail to prove that the inner -unity of the group exists otherwise the in the minds of the members who compose it. • Also it is difficult to prove that there is a psychological continuity of experiences in the group mind similar to that of the individual.

5. Fiction Theory: This theory was propounded by Savigny and Salmond. According to him, personality is attached to corporations, institutions, and associations by legal fiction. The legal personality of entities other than human beings is the result of fiction.

Hence, not being a human being, the corporation cannot be a real person and cannot have any personality on its own. As an incorporated person is created by the fiction of law, the law may uplift its veil when justice requires, either in case of determination of enemy character or to prevent fraud or improper character.

Supported by von Savigny, coke, Salmond, and Holland. Which says that a personality is attached to groups and institutions by pure legal fiction and this personality is distinct from the personality of the individual being .

Not being a real person, the corporation cannot have any ” personality ” of its own; it has no will, no mind, and no ability to act. It can have only so much as the law imputes as it by fiction as though it were a mere real person .

The famous case of Salomon v . Salomon co. Ltd is proof of the English’s adoption of the fiction theory.it was held that the company has fulfilled the requirements of the companies act. The company becomes a person at law, independent and distinct from its members.