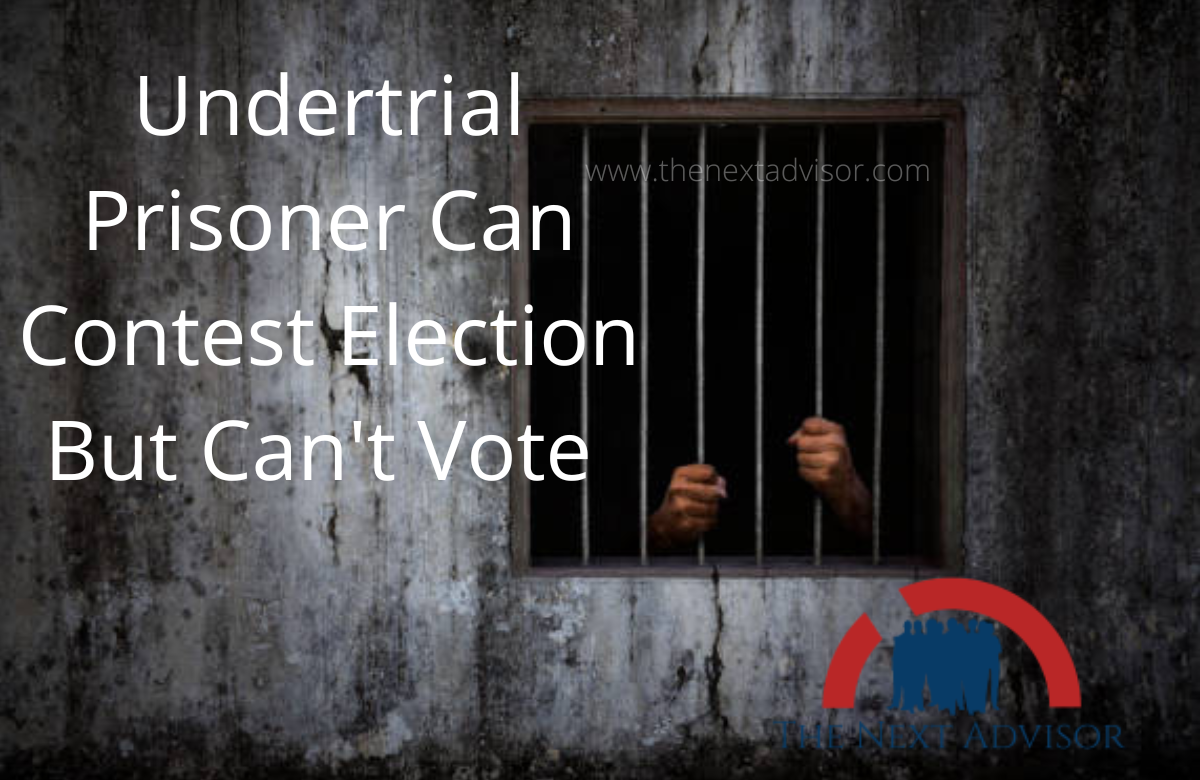 Undertrial Prisoner Can Contest Election But Can not vote.

Section 8 Representation of the People Act, 1951 –

Disqualification on conviction for certain offences-

▪ the Prevention of Terrorism Act, 2002 shall be disqualified, where the convicted person is sentenced

▪ A person convicted of any offence and sentenced to imprisonment for two years or more.

( 1 ) only those people who are for the time being entered in the electoral roll of any constituency shall be entitled to vote in that constituency .

( 3 ) No person shall vote at a general election in more than one consistency of the same class, if she does so, her votes shall at all such places.

( 4 ) No person shall at any election vote in the same constituency more than once, if he does so vote, all his votes in that constituency shall be void

( 5 ) No person shall vote at any election if he is confined in a prison, whether under a sentence of imprisonment or transportation or otherwise, or is in the lawful custody of the police: Provided that nothing in this sub-section shall apply to a person subjected to preventive detention under any law for the time being in force

Provided further that by reason of the prohibition to vote under this subsection, a person whose name has been entered in the electoral roll shall not cease to be an elector.

a person in custody not allowed to vote: Bombay High Court – (Undertrial Prisoner Can Contest election but can not vote)

• ” If a full play is given to the provisions contained in section 2 ( d ) and Section 62 ( 5 ) of the RP Act 1951, an inference becomes inescapable that a person in custody, either post-conviction or during the course of investigation or trial, is prohibited from casting vote in any election “.

Allowing a person in prison to vote, wouldn’t strengthen democracy .

• It would suffice to note that the concept of ‘ democracy ‘ transcends ‘ electoral democracy ‘. The purity of the electoral process and the probity of the participants therein are also of equal significance in strengthening the democratic principles ….. I am, therefore, not inclined to accede to the broad proposition that permitting the persons ( who are otherwise not qualified to vote in the election ) strengthens the democracy, “.

Other takeaways from this Judgement

● A right to vote is not merely a statutory right but has been elevated to the level of a constitutional right, though certainly not a fundamental right.

• 324. Superintendence, direction and control of elections to be vested in an Election Commission.

• 326. Elections to the House of the People and to the Legislative Assemblies of States to be on the basis of adult suffrage .

• 327. Power of Parliament to make provision with respect to elections to Legislatures .

•This Act makes provisions for :

• Allocation of seats in the House of the People and the Legislative Assemblies through direct elections.

• The voters ‘ qualifications for the elections. • The Delimitation of Parliamentary and Assembly Constituencies.

•Disqualifications for registration in an electoral roll

• No person to be registered in more than one constituency.

• No person to be registered more than once in any constituency .

Representation of the People Act, 1951.

● ADMINISTRATIVE MACHINERY FOR THE CONDUCT OF ELECTIONS