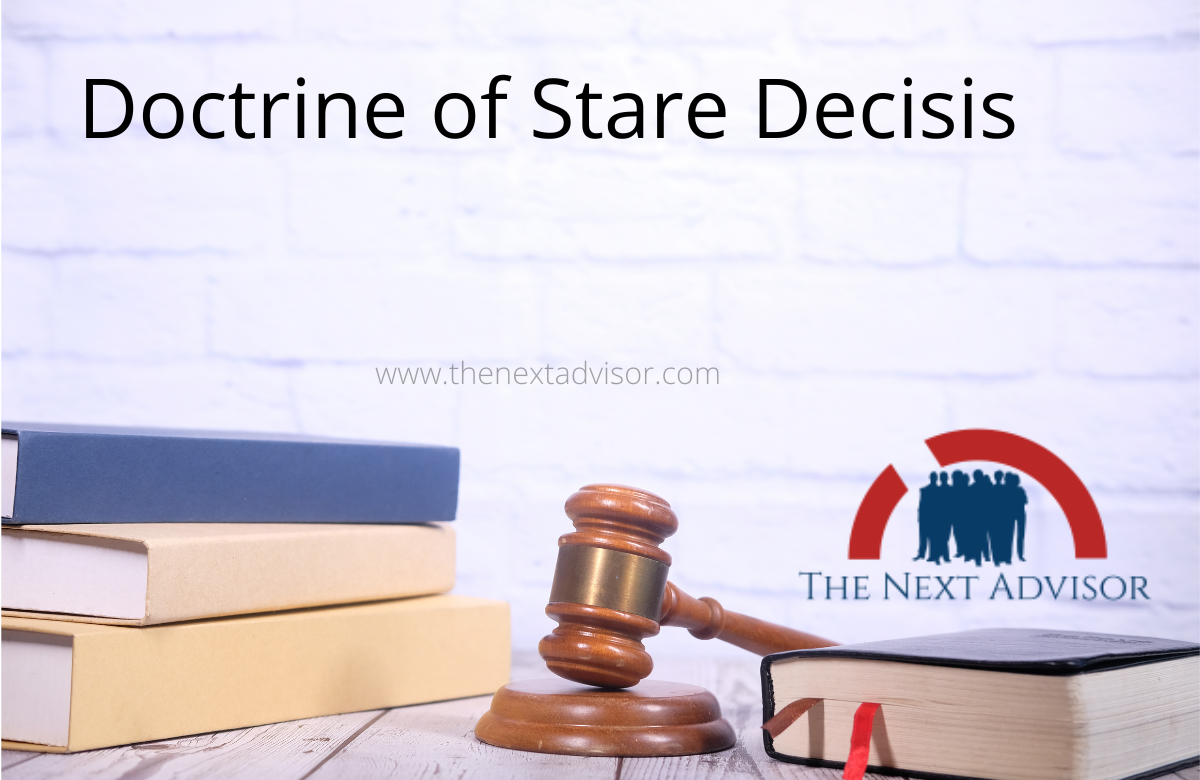 Meaning: – Latin Phrase ” To stand by decided cases; to uphold precedents; to maintain former adjudications “. According to the doctrine of Stare Decisis: A court is bound by its own earlier decisions. In other words, to stand by precedents where the same points come again in litigation.

What is Stare Decisis: 45 Law Our Stare decisis ensures that cases with similar scenarios and facts are approached in the same way. Simply put, it binds courts to follow legal precedents set by previous decisions.

Advantage of the Doctrine:

1. It is time savings and avoids unnecessary litigations.

2. It brought greater certainty and consistency to the law.

3. It eliminates the element of ambiguity and enables the lower courts to follow the decision of the higher court with the question.

The disadvantage of the Doctrine:

1. It is being criticized because of its effect of limiting the free development of law.

2. Foremost disadvantage of this doctrine and the precedent system is its rigidity and unwillingness to allow change.

3. Another disadvantage is its complexity which sometimes makes the situation more uncertain.

4. Many times judicial decisions deemed as mistakes are being continued in the form of precedent law.

The desire for certainty & continuity in law gave rise to the doctrine of stare decisis. Initially, due to the lack of recording the decisions or judgement of cases in written form, the doctrine of stare decisis was not freely used, but after the concept of recording the judgement came, widespread use of this doctrine was witnessed. In 1883 the urgent need for recognizing the binding force of precedents was brought to notice in the case of Mirehouse v . Rennel.

The doctrine of Stare Decisis

In India, the concept of precedent was established after the Britishers came to India, which lead down the hierarchy of courts and the concept of higher court’s judgement binding the decision of the lower courts. In 1935 the Government of India Act, explicitly mentioned that the decision of the Federal Courts & Privy Council will be binding on all the other Courts’ decisions in British India. Hence, from the 18th century till date stare decisis is a characteristic feature of our legal system.

Bengal Immunity Company Limited v . the State of Bihar, ( 1955 ): The SC has correctly pointed out that the words of Article 141- ” binding on all courts in India “, do not include the Supreme Court. The SC is not bound by its own judgments but is free to reconsider them in appropriate cases as and when required.

Although there is no express provision, by convention, the decisions of a High Court are binding on all lower courts within the territorial jurisdiction of that HC. Similarly, a decision of a higher Bench is binding on the lower Bench.

While deciding the extent of applicability, of the doctrine of stare decisions upon the Supreme Court itself, Supreme Court has, in the case of Rupa Ashok Hurra v . Ashok Hurra & Anr AIR 1997 ], held that when the Apex Court is deciding any questions of law, it must take note that such decisions are being binding on all other subordinate courts, by the applicability of Article 141, and hence the SC must maintain an element of certainty and continuity in the interpretation of the law in the country.

The SC further stated that if the previous decisions, which are already having a force of precedent, are reviewed and altered, then it might lead to making the law uncertain, and might create confusion in its applicability, which must be constantly avoided. So, the higher courts must overrule its previous decision only after being satisfied that the previous decision was erroneous, and a fair amount of ambiguity is present and that to clear out such ambiguity the intervention of the court is necessary.

• THE SUPREME COURT AND HIGH COURTS ARE THE COURT OF RECORDS.

• THE JUDGEMENT OF THESE COURTS ARE RECORDED FOR PERPETUAL MEMORY AND THESE RECORDS CAN NOT BE QUESTIONED IN ANY LOWER COURT OF LAW PADHO AUTO V RECORDER.