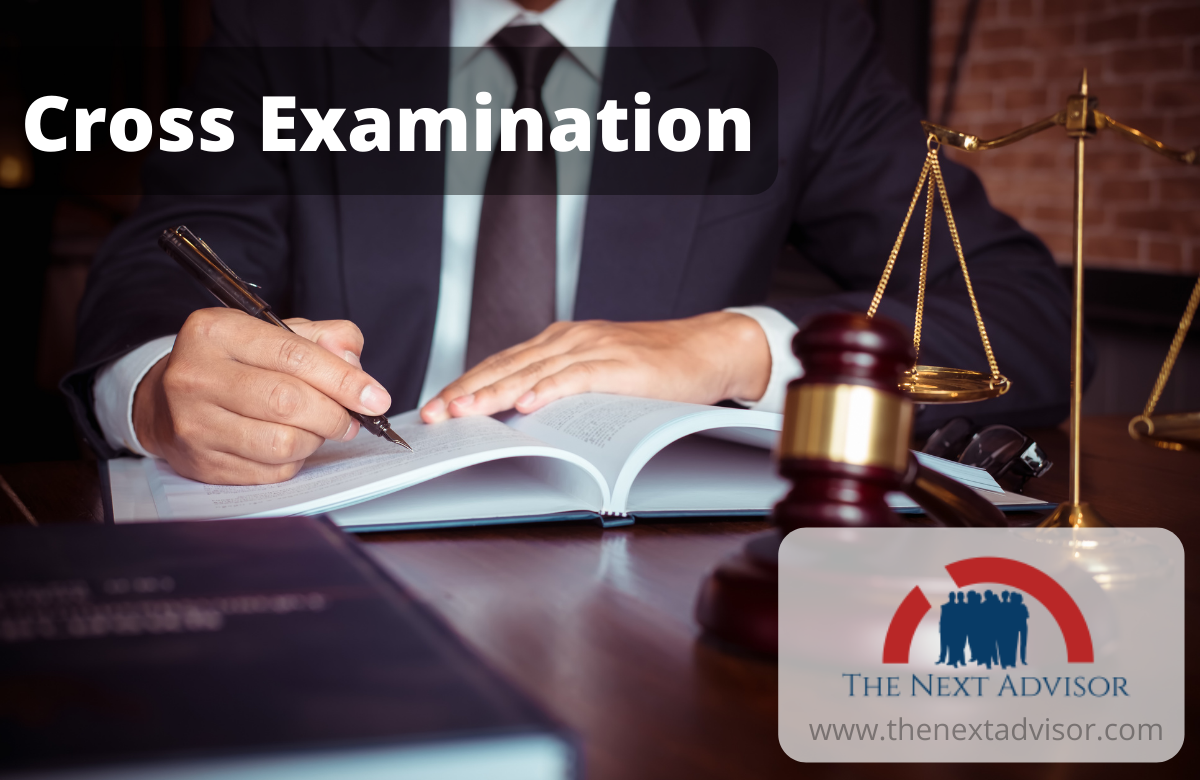 What is the cross-examination?- The examination of a witness by the opposite side, generally after examination in chief, but sometimes without such examination; as in the case of an examination on the voir dire (speak the truth), which in the nature of cross-examination and also if one party calls a witness, and he is sworn the other party may cross-examine him, although the party who has called him put no question at all to him.

Sometimes questions in cross-examination are allowed by the judge after re-examination. And if a witness is called to prove some preliminary and collateral matter only as of the handwriting of a document tendered in evidence he is a witness in the cause and maybe cross-examined as to any of the issues in the cause.

As to the form of the cross-examination leading questions are allowed, which is not the case in examination in chief. The questions must be relevant to the issue, but great latitude is allowed as a question seemingly irrelevant often turns out otherwise.

It is provided by R.S.C., 1883, order XXXVI, Rule 38, that the Judge may disallow vacations and irrelevant questions and by Section 25 of the CLP Act, 1854, that if a witness denies a conviction for a felony, it may be proved.

The following are some of the chief heads of cross-examination:-

I. To cause their witness to alter or amend his evidence.

b. Misunderstands the meaning of a word; or

2. By inquiring about the grounds of his belief.

3. By appealing to his consciousness of a weak memory

-To modify the evidence given in chief, by causing the witness to speak to supplementary facts to show

b. The circumstances surrounding it.

c. The manner in which it was treated at the time.

II. To discredit the evidence of the witness.

a. From reasons connected with himself

-With all reasons and probability.

-With evidence of witnesses of indisputable credit.

-With parts f the case not in dispute.

-With what he himself has previously said.

a) On a previous occasion.

b) In the examination in hand.- in chief and in the prior part of his cross-examination.

– With his own conduct in the transaction or the conduct of witness of undisputed credit.

– With his demeanor in court, as to irritate him.

III. To cause him to give evidence to be received as true.

– Confirming the evidence of the questioner’s witness.

– Contradicting that of the opponent’s witnesses.

– On a region of facts not previously entered upon.

The right of cross-examination is indeed a valuable right and is a powerful weapon in the hands of the adversary. Normally, this should not be denied. However, the right should be exercised in a reasonable manner without causing undue procrastination.