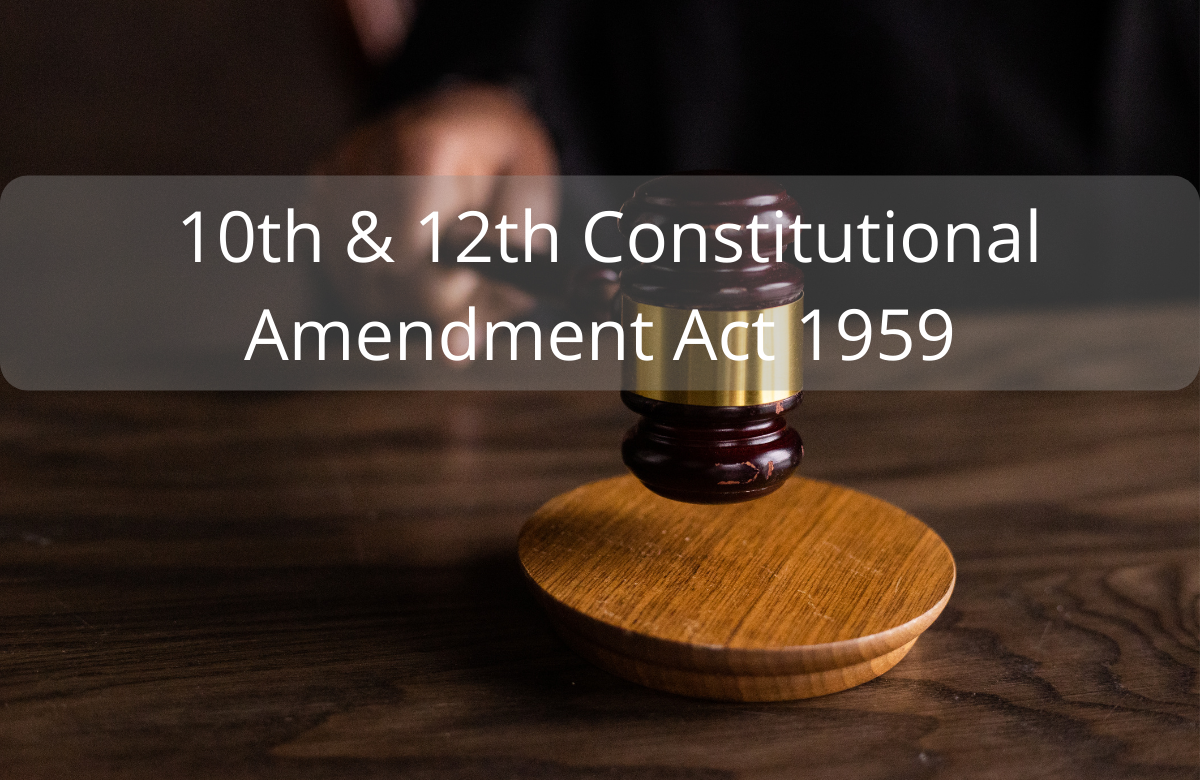 Dadra and Nagar Haveli now with capital city Silvassa, in Western India, was ruled by the Marathas ill 1779. The 72 villages it comprises were offered to the Portuguese following a friendship treaty. Portuguese rule over the Union Territory lasted until August 2, 1954, and traces of it can still be found.

In 1961, Dadra and Nagar Haveli became a part of India and since then, it has been administered as a Union Territory, with Silvassa as its capital.

The Union Territory is dotted with ruins from its glorious past. One of Dadra and Nagar Haveli’s major tourist attractions is in Silvassa – the Church of Our Lady of Piety ( built-in 1889 and still standing strong ). The Bindrabin temple, also at Silvassa, is another famous tourist attraction.

STATEMENT OF OBJECTS AND REASONS for 10th & 12th Constitutional Amendments

The Government of India decided that these territories should form part of the Union of India.

Dadra and Nagar Haveli by amending the First Schedule to the Constitution. It is further proposed to amend clause

(1) of Article 240 of the Constitution to include therein the Union territory of Dadra and Nagar Haveli in order to enable the President to make regulations for the peace, progress, and good government of the territory.

•Before the arrival of the Portuguese, both Daman and Diu (which are separated by the Gulf of Khambhat ) were part of the Sultanate of Gujarat –

• an independent kingdom comprising present-day Gujarat and neighboring areas during the 15th and 16th centuries.

• Early in the 16th century, the Sultan of Gujarat, Bahadur Shah, came under immense pressure when his kingdom was invaded by the second Mughal Emperor Humayun.

• At that juncture, he decided to remain on conciliatory terms with the Portuguese, who had arrived in India at the end of the 15th century, and were at the time an energetic and ambitious maritime power.

•In 1534, the Shah signed the Treaty of Bassein with the Portuguese, ceding Diu to the latter, as well as other territories of his empire such as Vasai and the islands that today form Mumbai. The Portuguese obtained Daman from the Shah in 1559.

• For over four centuries, both Daman and Diu remained part of the Portuguese dominions in India, and were ruled by Goa.

STATEMENT OF OBJECTS AND REASONS

On the acquisition of the territories of Goa, Daman, and Diu with effect from the 20th December 1961, these territories have, by virtue of sub-clause ( c ) of clause ( 3 ) of Article 1 of the Constitution, has been comprised within the territory of India from that date and they are being administered as a Union territory by the President through an Administrator in accordance with article 239 of the Constitution.