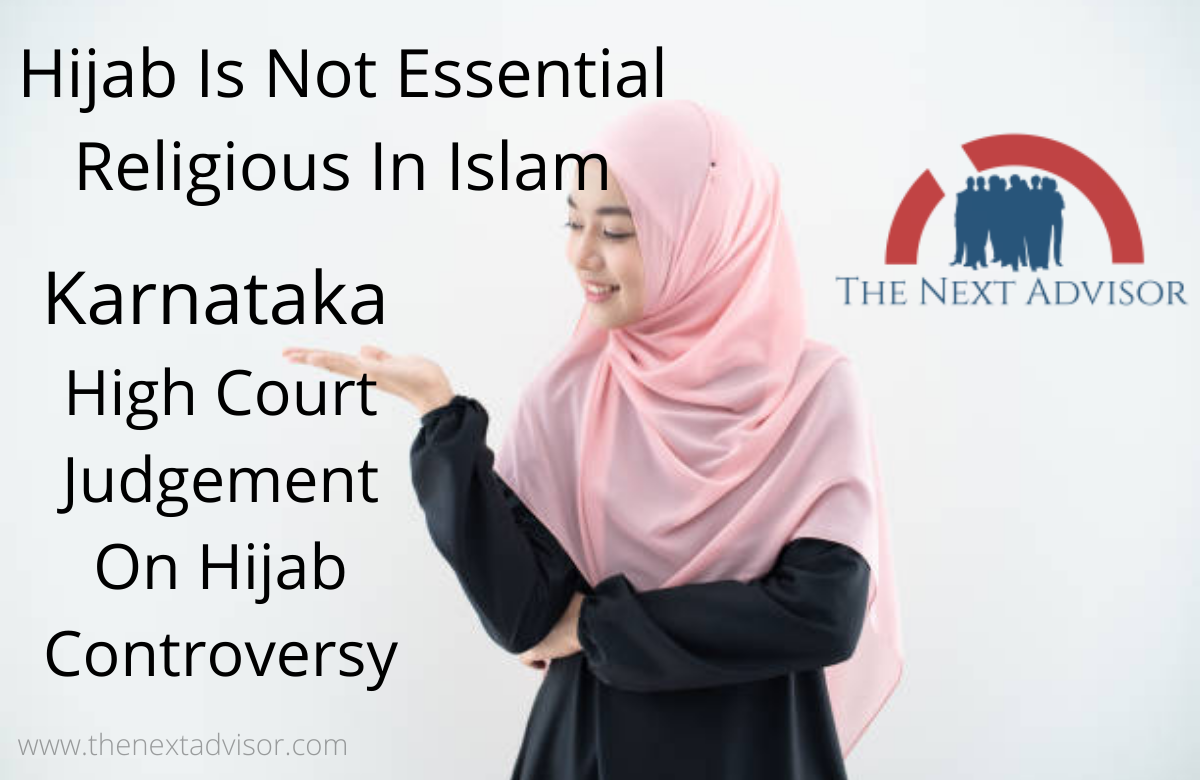 Today Karnataka High Court delivered the judgment on the Hijab controversy and said that Hijab is not an essential religious practice in Islam.  As you all must have seen or heard that Hijab Controversy was going on a large scale in the country. Which started from PU college in Karnataka, where some girls were coming wearing hijab, they were banned for wearing hijab.

Wearing of hijab is not a part of Essential Religious Practice in the Islamic faith and Thus, is not protected under Article 25 of the Constitution, the Karnataka High Court has held today. Whenever a matter related to any religion comes in the court, first of all, the court sees whenever the controversy is that it is essential for that religion or not.

Freedom of conscience and free profession, practice and propagation of religion

(1) Subject to public order, morality, and health and to the other provisions of this Part, all persons are equally entitled to freedom of conscience and the right freely to profess, practice, and propagate religion

(a) regulating or restricting any economic, financial, political, or other secular activity which may be associated with religious practice;

HEARING OF THE CASE

An important question before the Court, in this case, was whether the wearing of hijab is part of essential religious practice of Islam and whether State interference in such matters is warranted. The court was also called to consider whether the wearing of hijab partakes the character of the right to expression under Article 19 ( 1 ) ( a ) of the Constitution and whether restriction can be levied only under Article 19 ( 2 ).

The petitioners had also challenged a Government Order dated February 5, which observed that banning hijab will not violate Article 25, and Ordered that students should wear the dress code prescribed by the concerned College Development Committees. Meanwhile, the High Court had passed an interim order, restraining the students from wearing any sort of religious clothes in classrooms, regardless of their faith.

WHAT DO THE PETITIONERS SAID?

It was the petitioners’ case that wearing Hijab is an essential religious practice under Islam, and suspension of the same, even for a few hours during school, Undermines the community’s faith and violates their fundamental rights under Article 19 and 25 of the Constitution.

They heavily relied on a judgment of the Constitutional Court of South Africa, in KwaZulu-Natal and Others v Pillay, which upheld the right of a Hindu girl from South India to wear a nose ring to school.

The Advocate General appearing for the State argued:

(i) Wearing of hijab does not fall within the essential religious practice of Islam;

It was further the State’s contention that wearing hijab does not stand the test of constitutional morality and individual dignity, Laid down by the Supreme Court in Young Lawyers Association v. the State of Kerala ( Sabarimala judgment ).

WHAT did THE High Court say IN ITS JUDGEMENT?

The Court said that it has framed the following questions:

1. Whether wearing hijab is ERP in Islamic faith protected under Article 25.

2. Whether prescription of school uniform is violative of rights.

3. Whether notification of Feb 5 apart from being incompetent and manifestly arbitrary violates Articles 14 and 15.

4. Whether any case is made out for issuance of disciplinary inquiry against college authorities.

Chief Justice Ritu Raj Awasthi, who read out the operative portion of the judgment in the open court, said as follows:

” Our answers to the questions are, wearing of Hijab by Muslim women does not form Essential Religious Practice in the Islamic faith. Our second answer is prescription of school uniform is only a reasonable restriction, constitutionally permissible which students cannot object to .”

In view of the above, the government has the power to issue the notification of February 5 and no case is made out for its invalidation. No case is made out for the issuance of disciplinary proceedings against and writ of quo warranto is not maintainable. All writ petitions being devoid of merits are dismissed “.