When the Indian Constitution was being drafted, a member of the Constituent Assembly, Professor K.T. Shah, believed that the system shall be such that

After the recent Indian Presidential Elections, Draupadi Murmu will be India’s new President. Did you know that in these elections the common people do not vote? Instead, politicians chosen by us, vote in these elections. Perhaps the most special aspect of this presidential election is the one person, one vote funda does not work here.

When we vote in the State elections or the Central elections, the value of each of our votes is the same. But in these Presidential elections, the votes of some politicians are worth more than that of others. Let us see How Draupadi Murmu Won

Let us see how did the entire process work? And How did Draupadi Murmu Won?

According to Article 58 of the Indian Constitution, there are 3 conditions of eligibility for who can run for this election. The first condition is that they must be an Indian citizen. Secondly, they must be at least 35 years old. And third, they must be qualified to be a member of the Lok Sabha.

When the Indian Constitution was being drafted, a member of the Constituent Assembly, Professor K.T. Shah, believed that the system shall be such that if any minister wanted to run for the President’s post, they would have to resign from their post first. But Dr. B.R. Ambedkar rejected the suggestion because he believed that under such a system if several ministers wanted to be the President, then all of them would have to resign leading to administrative chaos in the government of the country. 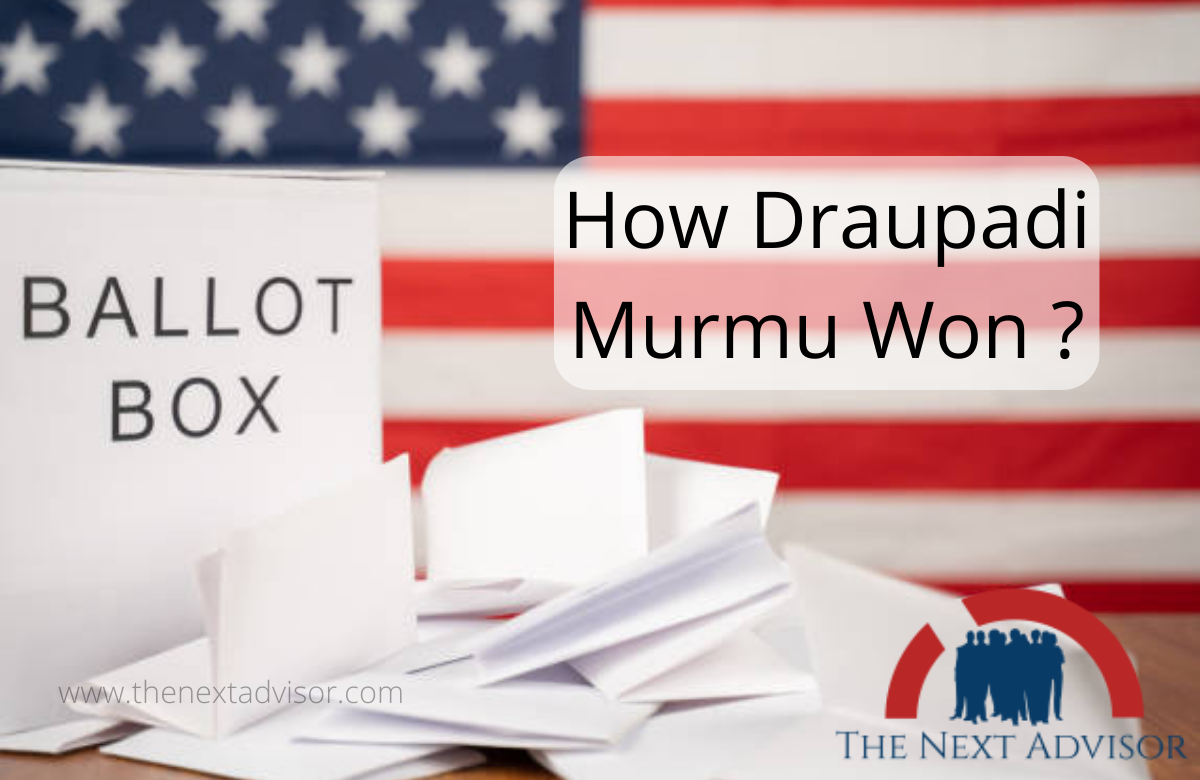 Therefore, the nominated members of the Rajya Sabha, can not vote. Now, let us get to the most interesting part. The system of one person, one vote does not work in this election because the makers of our Constitution wanted to maintain an equal balance between all the State governments and the Union government. (How Draupadi Murmu Won )

Additionally, they also wanted a balance between the Stated as well. It should not be such that states with the most elected MPs and MLAs have concentrated powers and more influence than some other states. So how is the value of one vote calculated? There is a formula for that.

The reason for this is that Article 81 of the Indian Constitution lays that the composition of the Lok Sabha, should be according to the 1971 census. Until the first census after 2,000 was published. But as we already know, after the first census, there have been 2 more after the year 2,00. But then in 2002, this date was postponed to 2026.

So the prescribed readjustment would happen only after that. Most probably the next census after that would form the new basis. So the population census of 2031, would be the basis on which the entire system would be adjusted. For now, we will consider the 1971 population. Let us understand this with an example. The population of Haryana in 1971, was 1,0036,808 people.

The total number of legislative seats in Haryana is 9-. When you divide this number by 90, you are left with 1,11,520. Further dividing it by 1,000 you will get the number 111.52. To round it off to the next whole number it will be 112. 112 is the value of the vote of Haryana’s MLAs. If any MLA from Haryana votes in the Presidential elections, the value of one vote would be 112.

The same calculation is applicable to every state and according to this system, the MLAs of Uttar Pradesh have the highest value of their votes, each of their votes has a value of 208, and the lowest value is given to the MLAs from Sikkim, the value of one vote is merely 7. So what is the total value of all the votes? Let us understand this with Haryana’s example once again.

The total value of votes in Haryana would be the value of 1 vote, multiplied by the total number of votes. So 112 multiplied by 90, we get 10,080. The same value can be calculated for each state. But Jammu and Kashmir are excluded from it, but after the repeal of Article 370, Jammu and Kashmir ceased to be a state, and have now become 2 union territories. Ladakh and Jammu & Kashmir. And because there are no legislative assemblies in these union territories they are under the President’s rule, therefore the politicians from here can not vote in Presidential elections.

Earlier, the total value of votes with Jammu and Kashmir was 6,264. So we will subtract this, and the remaining states and union territories, who are counted for the Presidential elections, their final value would be at 5,43,231. But this was only related to the MLAs/ and the MLAs chosen by the State Governments. But as I told you, the architect of our Constitution wanted to provide equal representation between all states and the Union government.

This number is then divided by 776, you will get 700.0399. Rounding it off to the nearest whole number, you will get 700. It means that the value of the vote of each MP is 700. Here, the MPs from different states are differentiated. All the elected members of the Lok Sabha and Rajya Sabha each their votes have the value of 700 assigned to them. (How Draupadi Murmu Won)

The situation was that there were 5 vacancies in Rajya Sabha and 6 vacancies in the State Assemblies. and 2 MLAs were disqualified, so there were a total of 4,025 MLAs eligible to vote. But actually, only 3,991 of them voted of the 771 MPs, only 763 voted. The overall voter turnout was at 99%, whereas in the general elections by the common people, the voter turnout is generally at 60%-70% and here it was 99%. (How Draupadi Murmu Won)

By the way, they vote on a ballot paper, while we vote on an EVM, they still continue to use ballot papers, and the candidate they are voting for does not need to be revealed to anyone. So it is good practice for democracy that any politician from any political party, can vote for any candidate secretly. Some interesting cross-voting can be seen in these elections across party lines.

The same year she had run for Councillor elections and won. Later, in 2000 she became an MLA, and then again in 2004, she became an MLA again. Later on in her career, she even held the portfolios of Transport and Commerce of Animal husbandry, and fisheries, under the Naveen Patnaik-led coalition government. In 2007, she was awarded the Neelkanth Award for being the best MLAs in Odisha. In 2009, she contested the Lok Sabha elections, but she lost there.

Over the next 6 years, she had to bear several unfortunate accidents with her. She lost both of her sons, and her husband, in a series of unfortunate incidents. But in 2015, senior BJP leaders made her the Governor of Jharkhand and she became the first tribal woman to be governor. Gandhi, Pandit Jawaharlal Nehru, and Dr. Ambedkar Have been inspirations for her, and she raised several concerns, about the poor living conditions about the poor living condition of the SC/St.