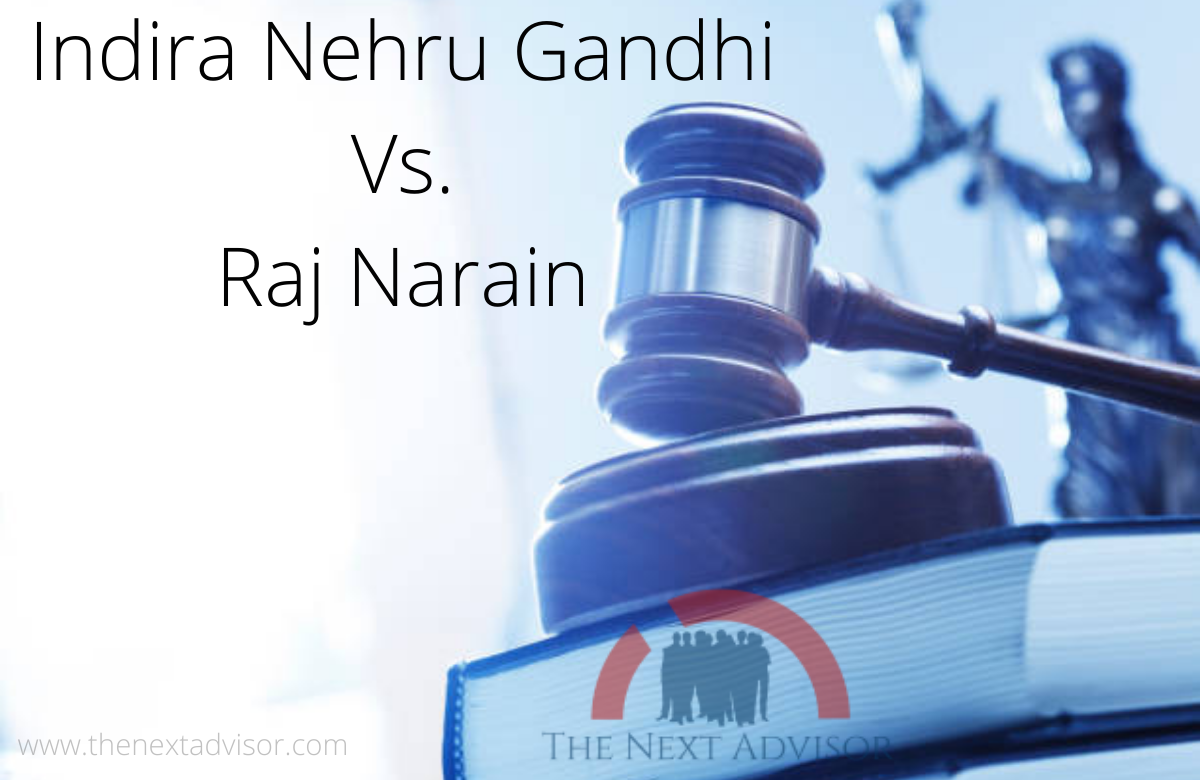 At the same time, the contestant who was opposite Indira Gandhi lost that general election. After this, Raj Narain accuses Indira Gandhi won the election by using corrupt practices and using muscle power.

During this time, Parliament passed the 39th Constitutional Amendment, which added a new Article 329A. Article 329A (clause 4) stated that the election of the Prime Minister and Speaker cannot be challenged in any Court in the country. It can instead be challenged before a committee is formed by the Parliament itself.

Facts of the Case

Raj Narain was the political contender against Indira Gandhi for Rae Bareilly Constituency in the 1971 Lok Sabha General Elections. Mrs. Gandhi won the election & congress won the house with a sweeping majority.

However, after the results of the polls, Raj Narain filed a petition before the High Court of Allahabad contending that Indira Gandhi has performed Election malpractices.

The High Court of Allahabad speaking under Justice Jagmohanlal Sinha found Indira Gandhi guilty of misusing government machinery u/s-123(7) of Representative of Peoples Act, 1951. Therefore, the court held that Indira Gandhi cannot continue as the Prime Minister of the nation, further, she cannot contest elections for another six years.

Aggrieved by this decision Indira Gandhi went to appeal this ruling of Allahabad High court in Supreme Court. However, SC being in vacation at that point of time granted a conditional stay on execution on 24 June 1975.Facts of the Case

Thereafter, a State of Emergency was declared by the then President Fakhrudeen Ali Ahmad citing internal disturbance but the real reason that led to the Emergency was the High court judgment in Raj Narain v. Uttar Pradesh

However in the emergency they passed 39th Constitutional Amendment which limited the preview of the court by keeping Prime Minister’s Election out of Judicial Review .

The main question of law involved in Indira Nehru Gandhi Vs. Raj Narain was of the validity of clause 4 of Article 329 A. The question was whether clause (4) of the said Article was violative of the principle of equality as envisioned in the Constitution. And whether this clause destroyed judicial review.

Judgment of the case – Indira Nehru Gandhi Vs. Raj Narain

The clause was struck down by the Court on the ground that it violated free and fair elections which was an essential feature that formed the basic structure of the Indian Constitution. The exclusion of Judicial review in election disputes in this manner resulted in damaging the Basic Structure.

The Supreme Court held that clause 4 of Article 329 A was unconstitutional and void on the ground that it was an outright denial of the Right to Equality enshrined in Article 14. It was held by the Court that these provisions were arbitrary and were calculated to damage and destroy the Rule of Law.

Justice H.R. Khanna held that democracy is the basic structure constitution and it includes free and fair elections which cannot be violated. The Supreme Court, in this case, added the following feature as ‘Basic Structure’ to the list of Basic features of our Indian Constitution.

Chandrachud Justice in Indira Gandhi case said:- This judgment took the opportunity to expand the scope of the basic structure by identifying 4 basic features:-

The apex court upheld the contention of the petitioner and declared the impugned Clause 4 of Article 329A unconstitutional. C.J. found another basic feature violated by the said amendment i.e. rule of law

The bench also found the said amendment violates the principles of natural justice i.e. Audi Altrem Partem since it denies the right of fair hearing who is challenging the election of the members mentioned under the amendment.

The amending body i.e. Parliament is not empowered to pass a retrospective law validating an invalid election .

Therefore , on the varied reasons the court struck down the 39th ( Amendment ) Act , 1975 finding it unconstitutional and violative of Basic Structure of the Constitution .

This is all and everything about Indira Nehru Gandhi Vs. Raj Narain.