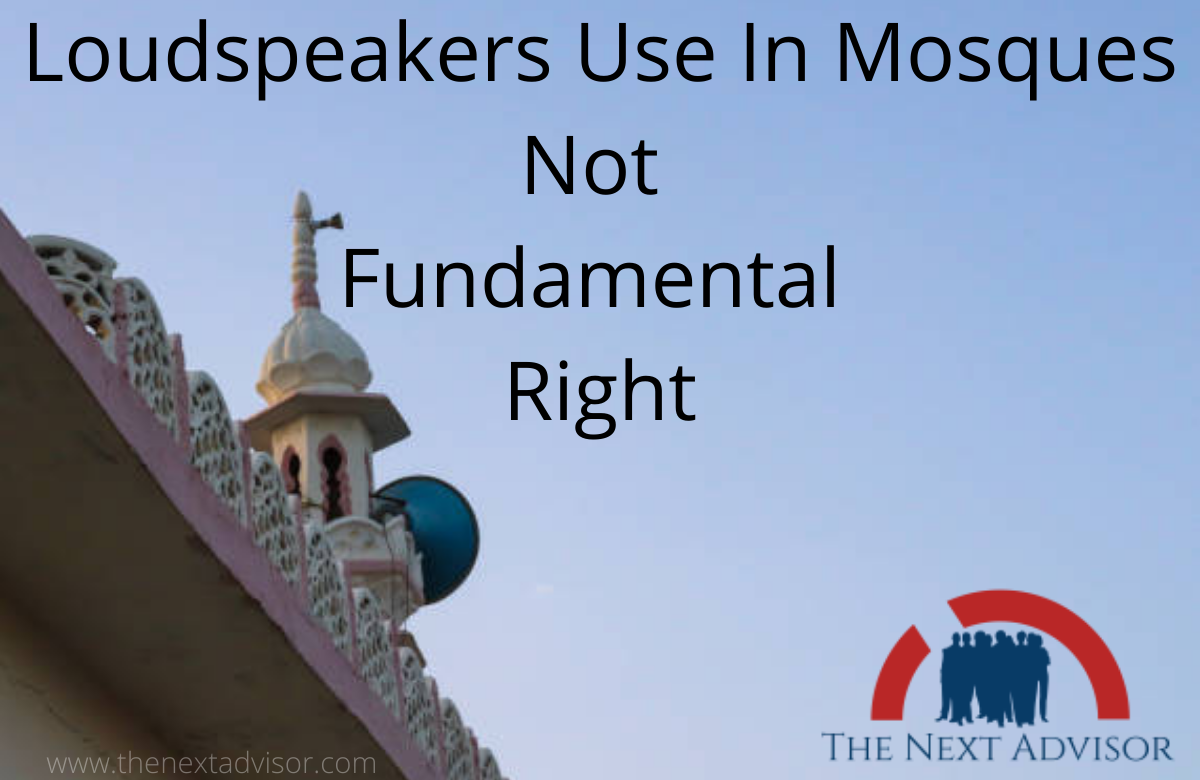 “Azan is certainly an essential and integral part of Islam but the use of microphone and loudspeakers use in Mosques is not Fundamental right or the use of loudspeakers is not an essential and an integral part thereof…Azan can be recited by Muezzin from minarets of the Mosques by human voice without using any amplifying device and such recitation cannot be hindered under the pretext of violation of the Guidelines issued by the State, to contain the pandemic-Covid19”.

1. Whether any order prohibiting or restricting the recitation of Azan, through sound-amplifying devices, violative of Article 25 of the Constitution of India and therefore arbitrary and unconstitutional?

• With respect to the first issue, the main argument of the petitioners of the case in which High Court of Allahabad State that Loudspeakers Use In Mosques is Not a Fundamental Right, is that they cannot be prohibited or restricted from reciting Azan through the use of loudspeakers/microphones since offering Azan through sound-amplifying devices is an integral part of Islam and the prohibitions/ restrictions sought to be imposed in this regard, impede their fundamental right under Article 25 of the Constitution of India to profess, practice, and propagate the religion of Islam.

• It has been submitted by the learned counsel for the petitioners that Azan was introduced by Prophet Muhammad. It was recited by a person from the mosque in a loud voice but with the passage of time, it was felt that a system was required to be introduced to invite the Believers in Islam to the congregational prayers by reciting Azan five times a day through a sound amplifying instrument since on account of increase in population, It was not possible for the Azan to reach all believers of Islam.

Therefore, reciting Azan through loudspeakers five times a day is part of religious rights guaranteed under Article 25 of the Constitution of India.

• Per contra, learned Sri Manish Goyal, Additional Advocate General in the argument of the case in which the High Court of Allahabad Stated that the Loudspeakers use in Mosques is not a Fundamental Right, has stated that the right contained under Article 25 of the Constitution of India is subject to public order, morality, health, and Part III of the Constitution of India.

• He also very specifically referred to rule 5 of The Noise Pollution (Regulation and Control) Rules, 2000 (in short “Noise Pollution Rules“) which states that a loudspeaker or a public address system shall not be used except after obtaining written permission from the authority.

Loudspeakers’ Use In Mosques Not a Fundamental Right

High Court of Allahabad State that-

• 16. The argument made by the learned counsel for the petitioner is totally misconceived and has no basis.

We proceed to deal with this issue in detail. At this stage, it will be relevant to quote Article 25 as well as Article 19 (1)(2).

Article 19 in The Constitution Of India 1949

19. Protection of certain rights regarding freedom of speech etc
(1) All citizens shall have the right
(a) to freedom of speech and expression;
(b) to assemble peaceably and without arms;
(c) to form associations or unions;
(d) to move freely throughout the territory of India;
(e) to reside and settle in any part of the territory of India; and
(f) omitted
(g) to practice any profession, or to carry on any occupation, trade, or business
(2) Nothing in sub-clause (a) of clause ( 1 ) shall affect the operation of any existing law, or prevent the State from making any law, in so far as such law imposes reasonable restrictions on the exercise of the right conferred by the said sub-clause in the interests of the sovereignty and integrity of India, the security of the State, friendly relations with foreign States, public order, decency or morality or in relation to contempt of court, defamation or incitement to an offence.

Article 25 in The Constitution Of India 1949

•the issue of the use of sound-amplifying devices for amplifying the human voice and other sounds while offering daily pujas by a Hindu Organization arose before the Calcutta High Court in the case of Om Birangana Religious Society Vs. The State and Ors:-

• Paragraph 17. There cannot be any dispute that sound is a known source of pollution. The adverse and ill effect of sound on the human body is also known. It has a tremendous impact on the nervous system of human being

• Subsequently, the issue of using sound-amplifying devices for the purposes of reciting Azan was specifically dealt with by the Calcutta High Court in the case of Moulana Mufti Syed Mohammed Noorur Rehman Barkati and Ors. Vs. State of West Bengal and Ors. –

• After detailed discussions the Calcutta High Court while recognizing that Azan was certainly an essential part of Islam, held that the use of microphone and loudspeakers were not an essential and an integral part of Azan.

The Apex Court in the case of Church of God in India Vs. K.K.R. Majestic reported in (2000) 7 SCC 282 has held as follows: After taking the reference of this case High Court says Loudspeakers Use In Mosques Not Fundamental Right:-

• “no religion or religious sect can claim that the use of loudspeakers or similar instruments for prayers or for worship or for celebrating religious festivals is an essential part of the religion which is protected under Article 25. We hold that there is no fundamental right to use loudspeakers or similar instruments under Article 19(1)(a) of the Constitution. On the contrary, the use of such instruments contrary to the Noise Pollution Rules will be a violation of the fundamental rights of citizens under Article 21 of the Constitution as well as the fundamental right of citizens of not being forced to listen to something which they do not desire to listen”.

•A citizen has a right to leisure, right to sleep, right not to hear, and right to remain silent. He has also the right to read and speak with others.

•The use of microphones certainly takes away the right of the citizens to speak with others, their right to read or think, or the right to sleep.

• There may be heart patients or patients suffering from nervous disorders and they may be compelled to bear this serious impact of sound pollution which has had an adverse effect on them. It may create health problems.

• Freedom of religion is subject to others’ rights as guaranteed under Article 19(1)(a) of the Constitution, namely, religious freedom cannot abridge or take away or suspend others’ rights under Article 19(1)(a) regarding their freedom of speech and expression. The use of loudspeakers is not an integral part of Azan or necessary for making Azan effective. and Loudspeakers Use In Mosques Not Fundamental Right.