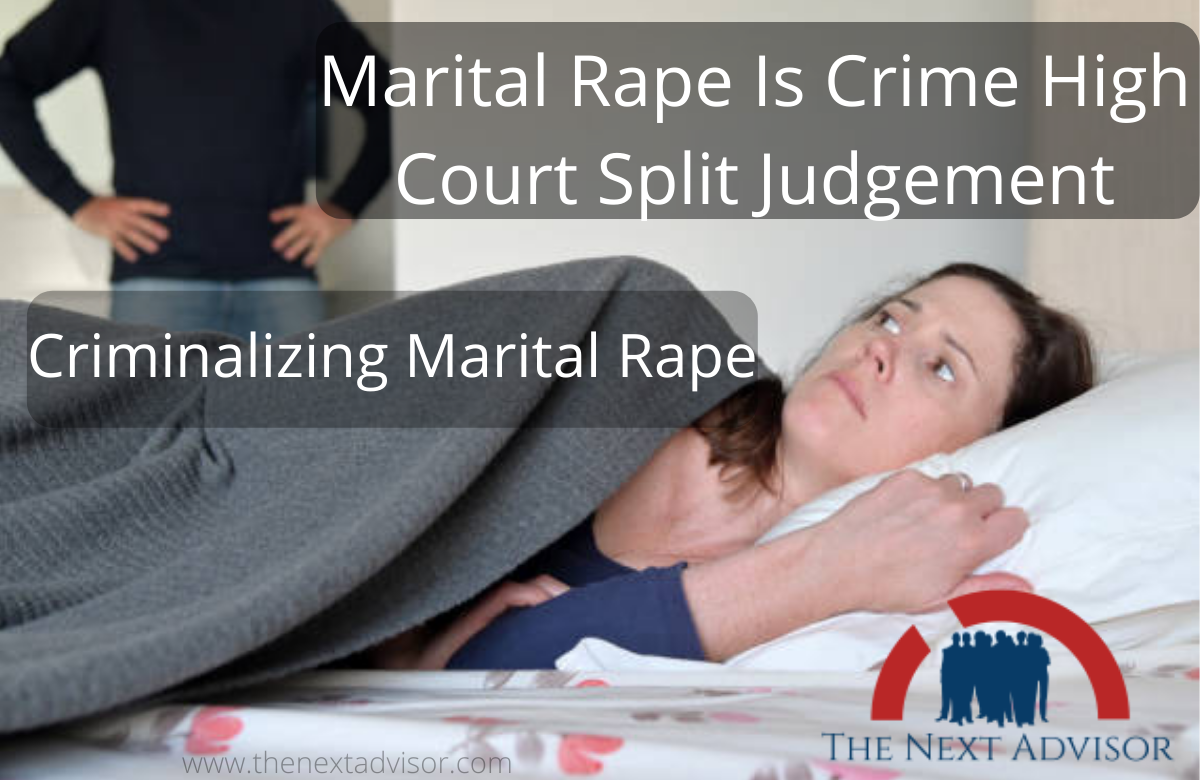 The roots of the rape provision are found in two doctrines of the British colonial era. The first doctrine was given by Matthew Hale, the Chief Justice of King’s Bench.

● ” Husband can’t be guilty of rape. By their mutual matrimonial consent and contract, the wife has given up herself in this kind to the husband “. The second Victorian doctrine that influenced marital rape immunity is the Doctrine of Coverture. According to this doctrine, a woman had no independent legal identity of her own after marriage. Her identity was merged with that of her husband and all her property was passed on to him.

Delivering a split verdict in pleas seeking criminalisation of marital rape (Marital rape is a crime), Justice Rajiv Shakdher of Delhi High Court, ruled in favour of striking down the marital rape exception ( exception 2 to Section 375 of the Indian Penal Code ), whereas Justice C Hari Shankar opposed the contention.

He split the Judgement to say that Marital Rape is a crime. Let us see what things were said by Justice Rajive Shakdher in favour of Marital rape as a crime.

● Certain xxxual offences need to be called out for what they are. xxxual assault by the husband on his wife which falls within the fold of Section 375 of the IPC, 6 in my opinion, needs to be called out as rape as that is one of the ways in which the society expresses its disapproval concerning the conduct of the offender.

●Oddly, the prevailing mores in society appear to stigmatize the victim rather than the rapist. Therefore, I agree with Ms Nundy that the xxxual assault that falls within the four corners of Section 375 of the IPC needs to be labelled as rape irrespective of whether it occurs within or outside the bonds of marriage. “

Violates Article 21 of the Constitution

● The reason is that the offence of rape and injury caused remains the same irrespective of who the offender is. The fact that the rapist is the husband of the victim does not make the act of xxxual assault any less injurious, degrading or dehumanizing.

● The judge opined that the exception is also violative of Article 19 ( 1 ) ( a ) of the Constitution, as it violates the guarantee given by the Constitution concerning freedom of expression, amongst others, to married women who are citizens of this country.

The guarantee of freedom of expression includes a woman’s right to assert her xxxual agency and autonomy.

The wife may also want to keep away from xxxual activity in a situation where the husband has contracted an infectious, xxxually transmissible disease, such as HIV; her refusal in such a situation may emanate not only on account of concern for herself but also, protect the progeny which may result from such communion. These are aspects which only exacerbate the lack of autonomy and xxxual agency which stands embedded in MRE, “

● A married woman’s right to bring the offending husband to justice needs to be recognized. This door needs to be unlocked; the rest can follow … It would be tragic if a married woman’s call for justice is not heard even after 162 years, since the enactment of IPC. To my mind, self-assured and good men have nothing to fear if this change is sustained “,

● Justice C Hari Shankar said that he does not agree with Justice Shakdher. Justice Harisankar has held that Exception 2 to Section 375 does not violate Constitution and that the exception is based on an intelligible differentia.

● Judges sitting in courts cannot, on the basis of arguments of Counsel, howsoever persuasive, create offences, or pass judgements which would result in an act, otherwise not an offence, being rendered an offence.

● A court cannot legislatively stipulate the punishment for the offence. If the Court is not empowered to prescribe punishments, equally, the Court cannot, by its order, convert an act which, prior thereto, was not an offence, into an offence.

● ” Any such contention would, at the very least, be purely presumptive in nature. This aspect is important. As Mr Tushar Mehta, learned Solicitor General correctly submitted, the impugned Exception, and its evisceration from the statute book, are not issues of merely legal import; the issue has wide societal and sociological ramifications, which cannot be ignored. The perception of the teeming millennia of this country cannot, therefore, be regarded as an illegitimate consideration, while examining the need, or otherwise, to retain the impugned Exception in Section 375 of the IPC. “