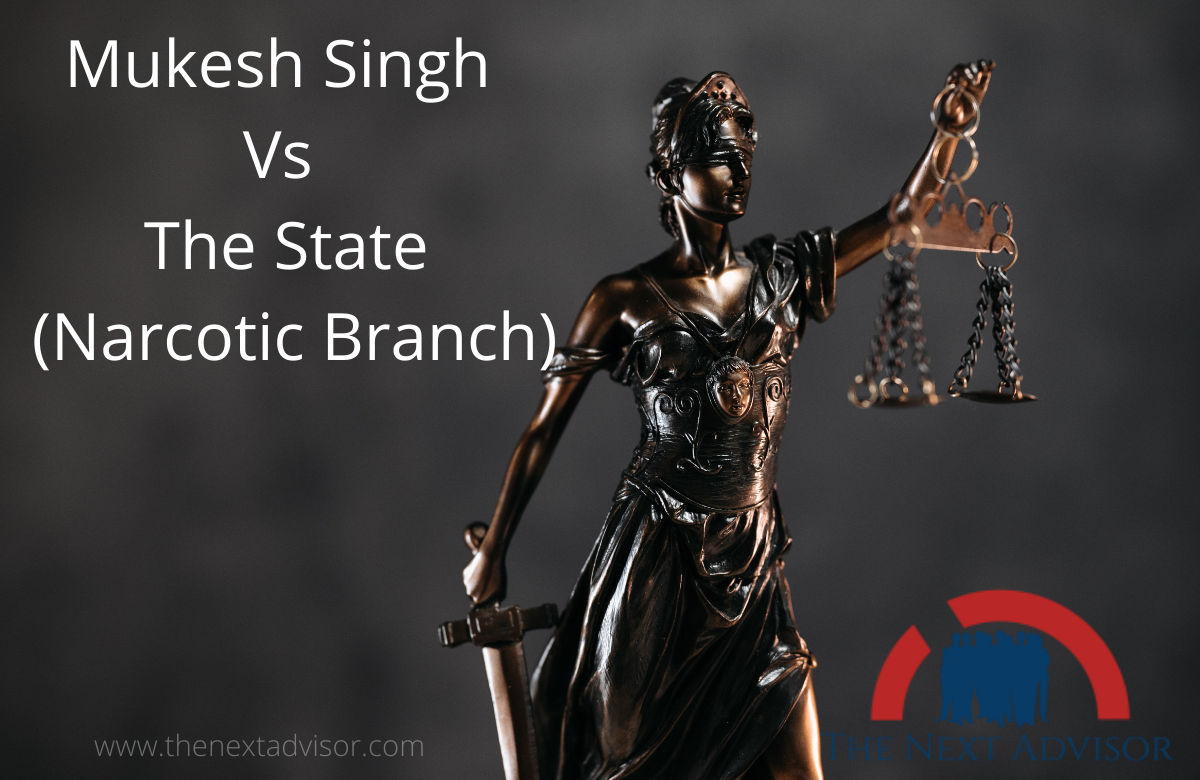 The Case named Mukesh Singh Vs The State (Narcotic Branch) is important because the following cases are overruled by the Court in this case. Let us see it.

Cases which is overruled in the Mukesh Singh Vs The State

Mohanlal vs The State of Punjab:- Held that the investigation is conducted by the police officer who himself is the complainant, the trial is vitiated and the accused is entitled to acquittal.

Varinder Kumar Vs State of Himachal Pradesh:- The Couer supported the conclusions that had been arrived at earlier.

Mukesh Singh Vs The State:- Js. U. U. Lalit and M.R. Shah referred the case to the larger bench- ti constitutional bench.

The issue in the Mukesh Singh Vs The State, 2020:- Can the trial be held to be vitiated because the informant and the investigator are the same people?

Section 52 ( 3 ) states that an officer who conducts an arrest/search/seizure under Section 42, must turn over the person/items to an officer empowered to investigate the case.

Surely, the text of Section 52 ( 3 ) suggested that Parliament was also uncomfortable with the same officer continuing as the investigating officer in a case.

• The Criminal Procedure Code 1973, Section 157 provides clear support for the same officer to continue as the investigating officer. The Code was also cited to argue that the categories of issues that render proceedings vitiated for ” illegality ” are clearly set out, and having the same officer continue on the case is not one of the specified grounds.

• On the scheme of the NDPS Act itself, it was argued that Section 52 did not demand that the officers must be different.

Judgment of the Mukesh Singh Case

• The judgment notes that it is nowhere stated that the officers empowered under 53 have to be different / shall be different from those empowered for 42. Thus, to require otherwise would be overstepping the judicial function by inserting words in the statute which do not exist.

• In case there is any doubt in the mind of the accused that the investigating officer, being the complainant/informant himself, would not conduct a fair investigation, then such question of bias or prejudice would be decided at the time of trial.

• That in such cases the reverse burden of proof is on the prosecution to prove that the investigation was conducted in a fair and judicious manner. The defence would also get a fair chance to cross-examine the officer and any other witnesses to the alleged crime.

• In the event that it is proved that the investigating officer has acted maliciously, then he would be punished under Section 58 of the NDPS Act

• The judgment also referred to the presumption of regularity that is attached to official acts under Section 114, illustration ( e ) of the Evidence Act, and observed that a rule of automatic bias would run contrary to this presumption.

Therefore, the Apex Court has overruled its judgment in Mohan Lal v State of Punjab and held that the accused cannot be granted acquittal merely on the ground that the trial has been vitiated because the informant and the investigator are the same people.