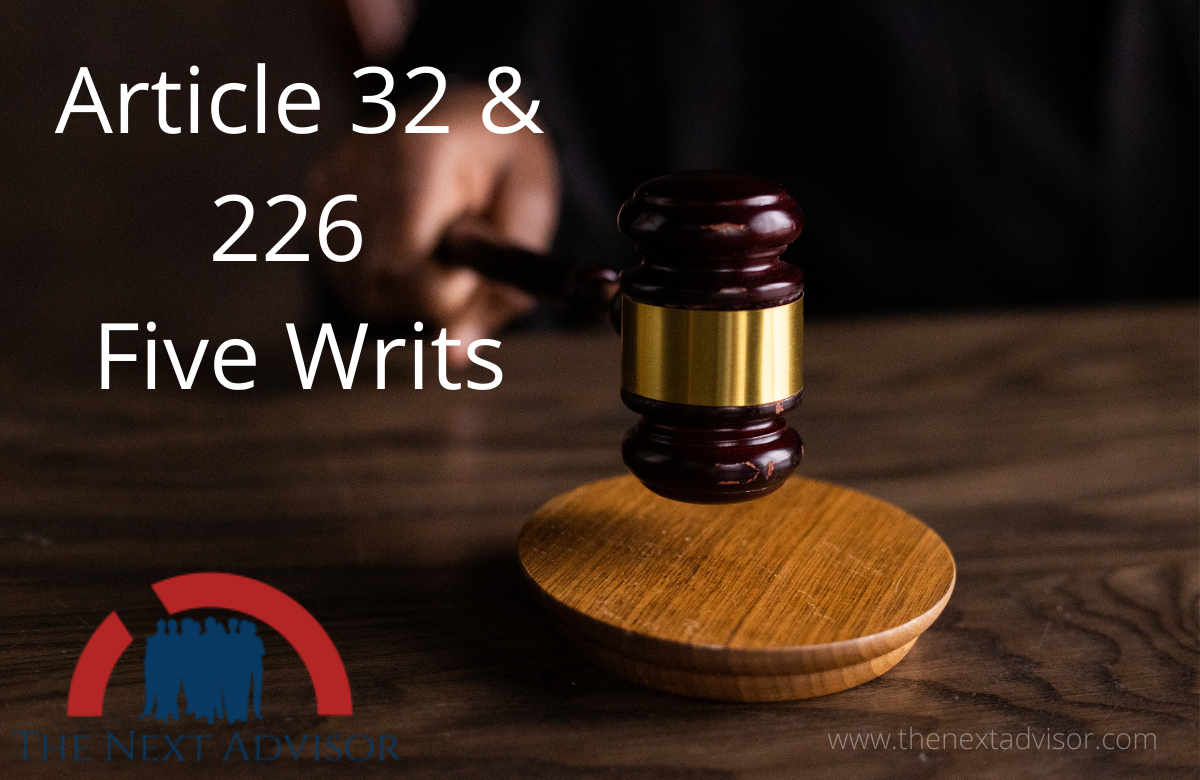 Hey, first let me intro you to the topic and the topic is Articles 32 and 226 of the Indian Constitution and Writs in detail. Suppose this is your private property. But – To protect that property you are not allowed to build a fence around your property, You are not allowed to do any construction around it. Nor are you allowed to evict a trespasser. In these circumstances can you properly enjoy your Property?

Hey, everybody, today I brought a perfect topic for you i.e. Five kinds of writs, about the protection of FRs, mainly about Article 32 and Article 226, with Important case laws.

Let’s start with first understanding the meaning of writs. So, we have been provided with different rights like the right to education, rights to dignity, right to life. But just like the Example, there is no meaning of Rights until they are properly protected. To put it simply whenever we buy any Jewellery, the first thing we think about it is its safekeeping. Just like that, for the protection of our fundamental rights and their safeguards, we have some constitutional Remedies. Protection of FRs has been discussed mainly in these Four Articles.

First Article 13- Which talks about judicial Review. Next is Article 359- Which says that FRs cannot be curtailed; except during emergencies. And then we have Article 32 and Article 226, which I am going to explain to you. Part III of the constitution talks about FRs- It extends from Article 12 to Article 35. This means that Article 32 which is my topic, is in itself an FR.

Now, Article 32 mainly talks about two types of Rights and Powers. D.R. B.R.Ambedkar has called this Article the “Heart and Soul of the Constitution”. The powers which are vested under Article 32, the same powers are also given under Article 226. By using Article 226- You can approach a High Court. Thus, these two Articles give you the power to approach the Highest Court of the Country, in case your Fundamental Rights are violated. Also, to protect your rights.

The writ issuing power laid down under

Now, Let’s start with our main topic. But let me explain a fact first. 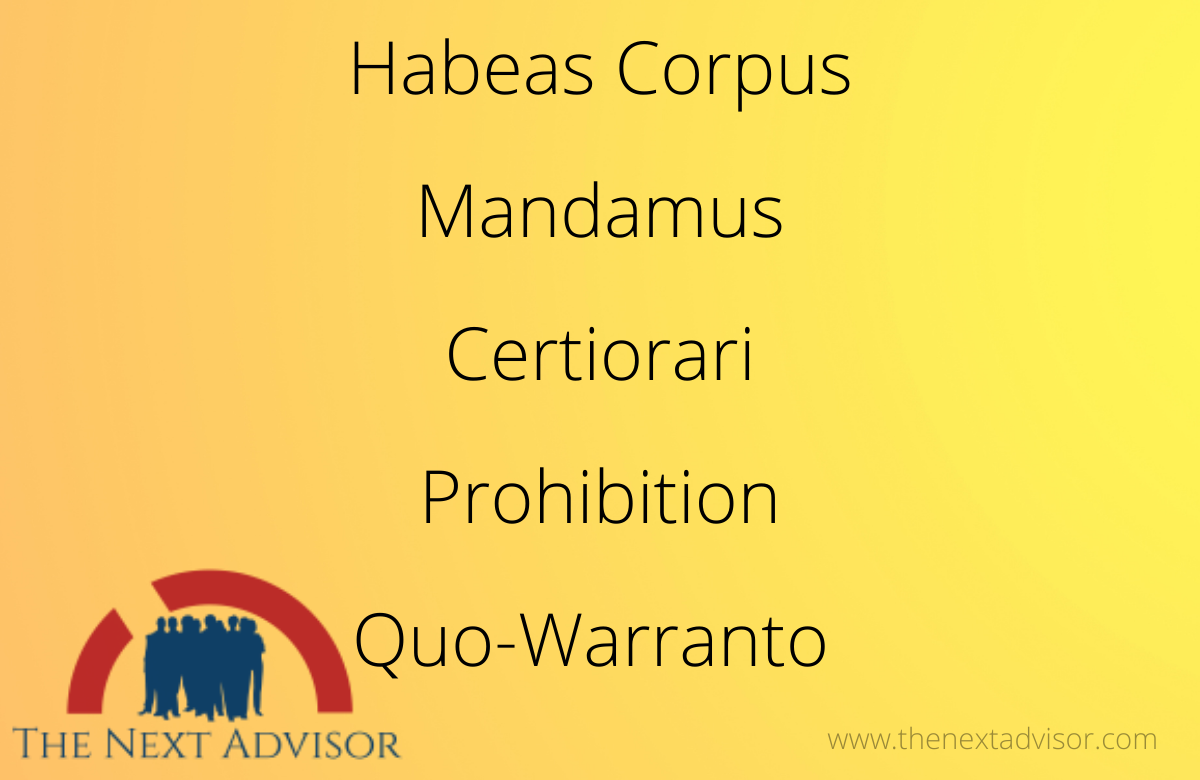 There are 5 types of the writ.

All 5 of them are Latin terms. Till now we have understood that ‘writ’ means a kind of a remedy. So, the writ has been classified into 5 heads.

1. Writ of Habeas Corpus:- it means to have a body. To produce a body. This is the most powerful and most used writ. See, if the state illegally detains a person then such an individual by himself or through his relative or friends can use the writ of Habeas Corpus, for the release of that person. So, whenever you use this writ Supreme Court or the High court asks the detaining authority on what basis the person was detained. If the basis is found to be unreasonable, then the detention ends and he is to be released with immediate effect.

You can not use the writ of Habeas Corpus in the following conditions.

In this case, a person who had already completed his period of detention was still kept in prison for EXTRA 14 YRS. In this case, the writ of Habeas Corpus was used which led to his immediate release. Additionally, he was given Exemplary Damages.

So, writ of Habeas Corpus is used to demand the production or release of a person who is illegally detained.

2. Writ of Mandamus:- which means ‘We Command’. You can use this website on any statutory, Non-statutory, University, Tribunal, etc.. and command them to perform their public duty. i.e, Through this writ, you can command a public official to perform his public duty.

Let me explain to you the case law to understand this writ.

In this case, the financial Co-op had an agreement with the lotus Hotels. That we will release the funds. So that you can complete your construction work. Later, they refuse to release the funds. So, Lotus Hotels approach the Gujrat High Court by using the writ of Mandamus. Directs the authority to perform the public duty which it promised to perform. There is 1 condition pre-requisite for the application of writ of Mandamus is there should be a public duty.

3. Writ of Certiorari:- which means ‘to be certified’. Through this writ, Supreme Court and High Court can command the Lower Court to submit its records for their review. In the review, it is checked that whether the Lower Court Judgements are illegal or not.

Now when can Lower Courts judgments be illegal?

A) Excess of Jurisdiction

B) Lack of Jurisdiction

If the Lower Courts judgments are to be illegal then they are quashed. This means that their judgment has no value now and is not to be followed.

Now Look at these two cases:-

A.K.Kralpak VS. Union of India

So Prohibition is used until the Lower Court has pronounced an illegal Judgment, then you use Certiorari.

If it is found out that you have not cleared the entrance eligibility then you can be removed from the College. Exactly this principle is followed in the writ of Quo Warranto, which means, ‘By What Authority.

By using this writ court can question any public officer that by what authority have you assumed this Public Office?

This is all about Article 32 and Article 226 of the Indian Constitution and the explanation of Five Writs in very simple language. To understand it more deeply please refer –https://www.thenextadvisor.com/all-about-public-interest-litigation/