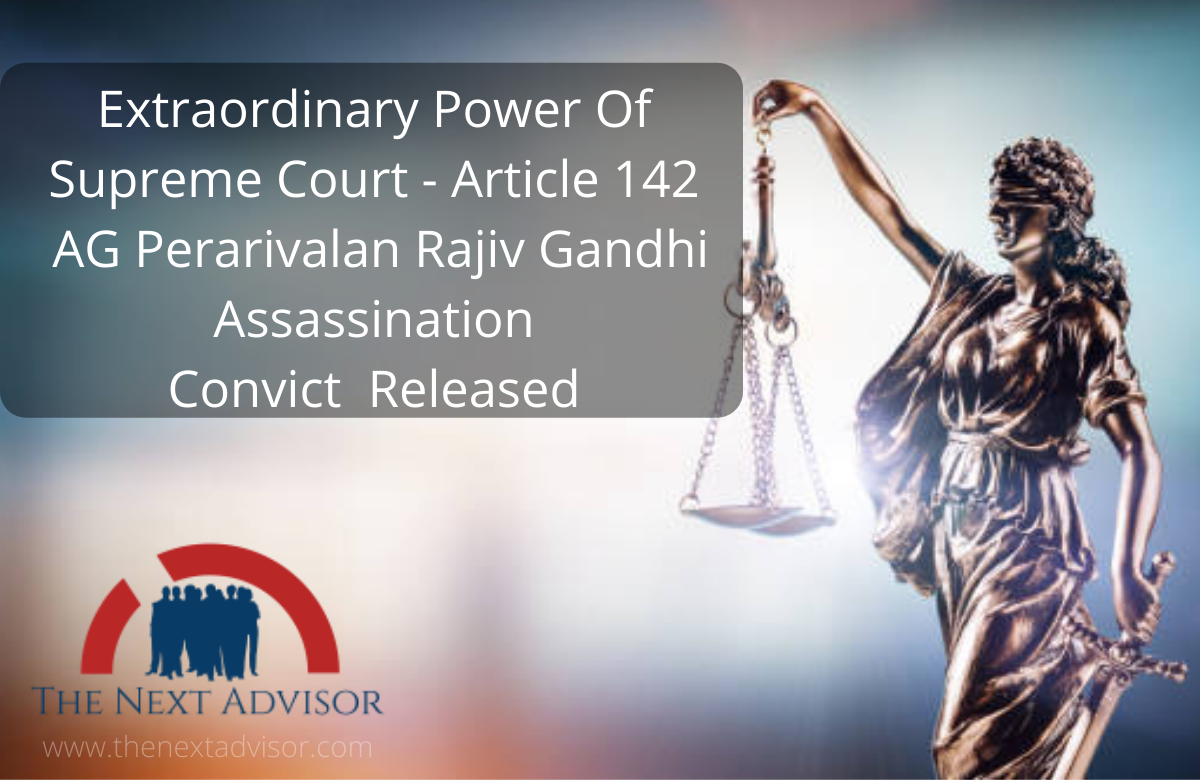 Background Of The Supreme Court ordered the release of AG Perarivalan, a convict in the Rajiv Gandhi assassination case, invoking the Extraordinary powers of the Supreme Court under Article 142 of the Constitution.

• AG Perarivalan was convicted and sentenced to death for aiding in making the bomb responsible for the assassination of Rajiv Gandhi.

• In 2014, his death sentence was commuted to life imprisonment by the SC on the ground of delay in deciding mercy petitions. In December 2015 he applied to the Governor for pardon and remission of his sentence. In the whole process, he has already spent around 30 years behind the bars.

• Governor is empowered under Article 161 to release the convict.

• But the pardoning powers are exercised by the Governor on the aid and advice of the CoM. Governor did not order release even after being recommendation given by the Tamil Nadu government in 2018 to grant him remission of sentence.

•Governor said that the President is the competent authority when it comes to remission of sentences of convicts. • Thereafter Perarivalan approached the Court.

• Supreme Court held that an exercise of powers by the Governor under Article 161 cannot have an inexplicable delay and it can be subjected to judicial review.

Article 142 of the Constitution:- (Extraordinary powers of the Supreme Court)

Enforcement of decrees and orders of Supreme Court and unless as to discovery, etc ( 1 ) The Supreme Court in the exercise of its jurisdiction may pass such decree or make such order as is necessary for doing complete justice in any cause or matter pending before it, and any decree so passed or orders so made shall be enforceable throughout the territory of India in such manner as may be prescribed by or under any law made by Parliament and, until provision in that behalf is so made, in such manner as the President may by order prescribe

(2) Subject to the provisions of any law made on this behalf by Parliament, the Supreme Court shall, as respects the whole of the territory of India, have all and every power to make any order for the purpose of securing the attendance of any person, the discovery or production of any documents, or the investigation or punishment of any contempt of itself.

●142 gives sweeping powers to the Supreme Court for the end of ensuring ” complete justice “.

●From Article 142, the Supreme Court Derives overarching powers to perform the function of executive and legislative in order to bring about complete justice.

●has been used generally to involve human rights and environmental protests.

• Article 142 along with (Extraordinary powers of the Supreme Court)

Chandrakant Patil vs State Through Cbi, 1998-TWO CONDITIONS is important to use the extraordinary powers of the Supreme court

It is now well settled that the Supreme Court’s powers under Article 142 of the Constitution are vastly broad-based. That power in its exercise is circumscribed only by two conditions,

• first is that it can be exercised only when the Supreme court otherwise exercises its jurisdiction, and

• the other is that the order which Supreme Court passes must be necessary for doing complete justice in the cause or matter pending before it.

In Delhi, Judicial Service Association vs. State of Gujarat SC made the position clear that-

• No enactment made by the Central or State legislature can limit or restrict the power of this Court under Article 142, though while exercising it the court may have regard to statutory provisions

• We are aware that powers under Article 142 are not to be exercised frequently but only sparingly.

• It is, thus, seen that the power of this court in respect of investigation or punishment of any contempt including contempt of itself, is expressly made ‘ subject to the provisions of any law made on this behalf by the parliament ‘ by Article 142 ( 2 ).

• In the Union of India ( UOI ) v . State of Maharashtra and Ors. ( 2019 ) it was held that Article 142 cannot be used to intrude on legislative territory which is one of the limitations while applying Article 142 to any case.

Known Cases where 142 was invoked

Union Carbide Case: 1989, to provide relief to the victims affected by the Bhopal Gas Tragedy.

• Ban on liquor sale on highways case: In 2016 sale of alcohol within a radius of 500 meters from the outer edge of the highway was banned.

Positive of the Provision:- When the legislature and executive failed to uphold the rights of citizens, the judiciary took lead under this article to do the same. The Doctrine of check and balance is exercised by the Judiciary, and Prevent the misuse of the provisions of law.

Demerits Of the Provision Unaccountability: unlike the executive and legislature, SC cannot be held accountable for its decisions, Judicial overreach and Excessive intervention by the Court can shake the trust of the people in Democratically elected governments.