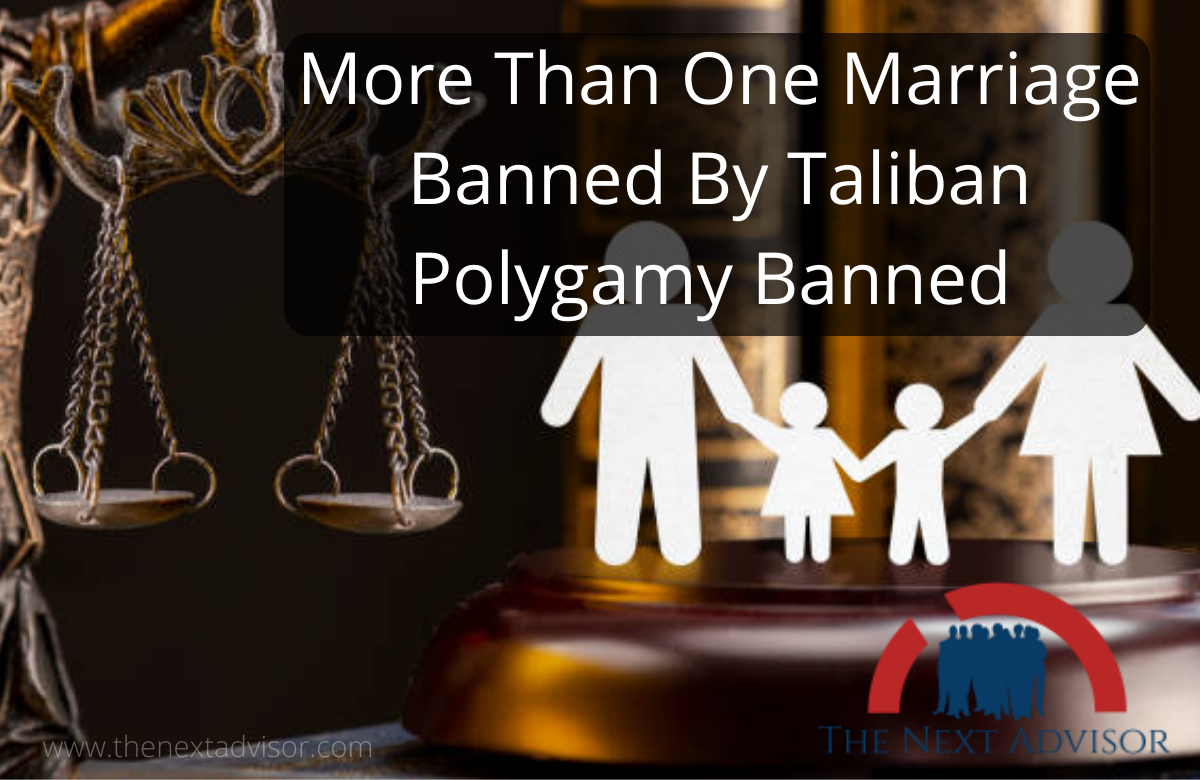 Taliban chief bans Polygamy, or More than one marriage banned by Taliban, calls it unnecessary and an expensive affair. According to reports, Taliban leadership believes that spending money on wedding ceremonies could lead to criticism.

Polygamy is also called Polyamory. Polyamory means love for more than one person at the same time. Taliban leader Hibatullah Akhundzada has issued an order banning Polygamy among members of the group. Means More Than One Marriage Banned By Taliban.

Is the Taliban really concerned about Women’s rights? For what purpose is More than one marriage banned by the Taliban?

The Delhi High Court is looking into a Public Interest Litigation which seeks to end polygamy & bring adequate arrangements for the existing wife’s accommodation and maintenance. The High Court has asked the Centre to submit it is stand on a petition filed by a Muslim woman wanting bigamy or polygamy to be practiced by Muslim men to be declared unconstitutional and illegal.

Why did the Taliban ban polygamy?

Polygamy is common among the Taliban and most senior members have more than one wife. Even the group’s founder Mullah Mohammad Omar reportedly had at least three wives. One of those was Osama Bin Laden’s daughter that had secured an alliance between the Taliban and al – Qaeda before the events of 9/11. The current chief has two wives, and Taliban leader Abdul Ghani Baradar has a harem of three.

The Taliban leadership is concerned about rampant corruption among members who were looking to raise money to either pay the bride price ( dowry paid by the groom to the bride’s family ) or sustain their many households . . The Taliban leadership believes that spending a huge amount of money on wedding ceremonies could lead to criticism from their enemies/opponents or from within the group .

Why did the Taliban ban polygamy?

Taliban orders its leaders to stop taking more than one wife because big weddings are too expensive and sparking resentment among fighters.

• Comes after rumors spread along frontlines of top brass living the high life .

Polygamy in India Section 494 [ 6 ] of IPC makes bigamy a criminal offence, but section 2 [ 7 ] of the Muslim personal ( Shariat ) Act 1937 allows the application of polygamy to Muslims. Muslim men in India are allowed to marry up to four women and the sanction for polygamy comes from the Quran which permits polygamy under certain conditions.

Note 1: The Quran says that a man can take a second or a third or a fourth wife but only from among orphans and widows and that he must treat them all equally. ( Roots of polygamy in Islam are from Medieval Jihad ) Note 2: Muslim women aren’t permitted to practice polyandry.

Polygamy in India Misuse of Polygamy rules – One of the issues with this law is that it was misused by the men to do multiple marriages, especially by converting to Islam. The issue was addressed by the supreme court in the case of Sarla Mudgal v . Union of India 1994, that the second marriage of a Hindu husband after embracing Islam being violative of justice, equity, and good conscience would be void.

Now that the Taliban has banned Polygamy (for whatever reason), Will Indian laws also prohibit polygamy for all? will India end the practice too? The Delhi High Court is looking into a PIL that seeks to end polygamy & bring adequate arrangements for the existing wife’s accommodation and maintenance.

The High Court has asked the Centre to submit its stand on a petition filed by a Muslim man to be declared unconstitutional and illegal. Law Commission inits 227th report ( 2009 ) presented to the government highlighted that traditional understanding of Muslim law on polygamy is gravely faulty and conflicts with true Islamic law in letter and spirit. Law commission said that since polygamy is allowed in the Muslim personal laws so it could not be banned before but it needs to be critically reviewed.

This is all about the interesting news that More than one marriage was banned by the Taliban. Taliban banned Polygamy or Polyandry.