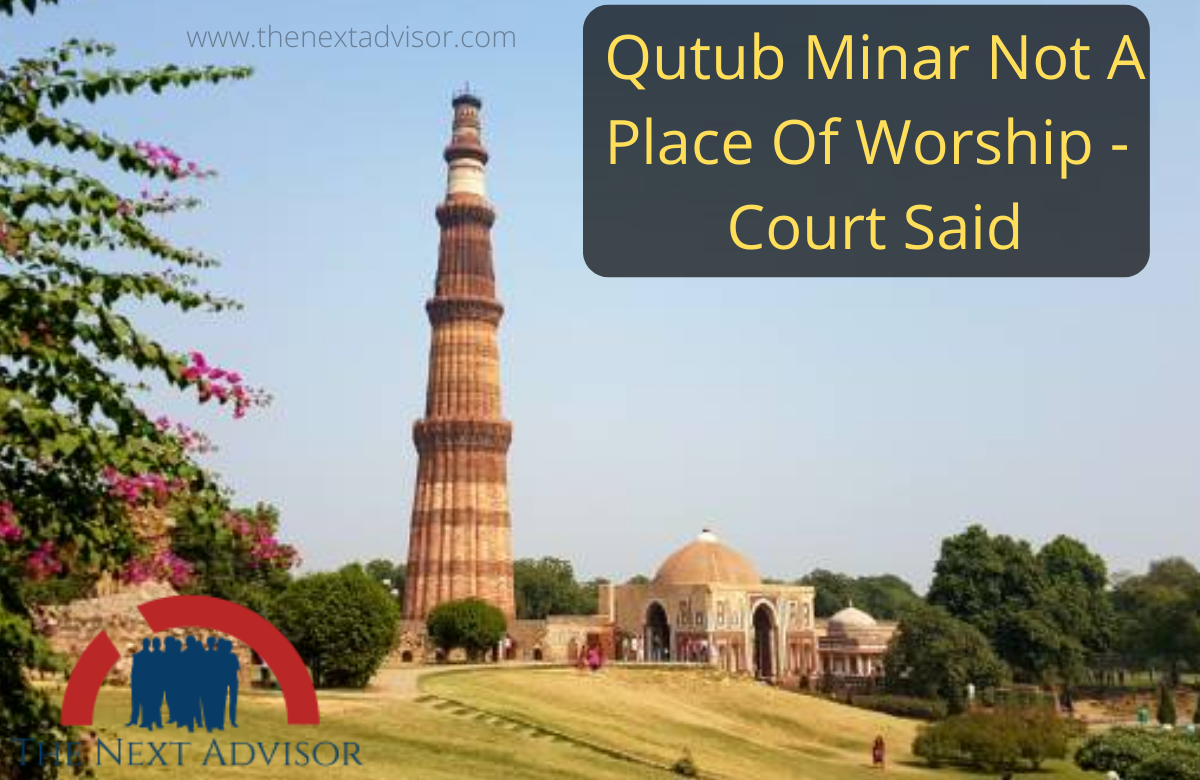 Qutub Minar is not a place of worship said ASI. Qutub Minar plea:- ASI says worship can not be allowed; Court verdict June 9:- Additional District judge Nikhil Chopra flagged two key aspects in the case- the right to worship and the character of the structure. The district court questioned how one can claim a legal right for restoration for something that happened 800 years ago.

SOME THINGS IMPORTANT ABOUT QUTUB MINAR

Qutub Minar is situated in Delhi and is famous as India’s tallest stone tower, rising 238 feet. It is also recognized by the UNESCO World Heritage site in 1993. According to history, Qutub al-Din Aibak have had started the Qutub Minar’s construction of the tower in the 13th century. It was completed by his successor, Iltutmish.

WHAT HAS HAPPENED?  Why Court said Qutub Minar is not a place of worship?

The Archaeological Survey of India ( ASI ) on Tuesday opposed the petition for the ” restoration of 27 temples alleged to have been destroyed to construct the Qutub Minar complex. This has, in a way, ignited a debate on the Ancient Monuments and Archaeological Sites and Remains Act ( AMASR ) Act, 1958, Which provides for the preservation of ancient, historical monuments, and archaeological sites and remains of national importance.

ABOUT THE PLEA IN COURT

The court was hearing a plea filed against an order of a magisterial court, which had dismissed a suit filed by advocate Hari Shankar Jain in relation to Jain deity Tirthankar Lord Rishabh Dev. He had claimed that 27 temples were partly demolished by Qutubdin Aibak, a general in the army of Mohammad Gauri, and The Quwwat – ul – Islam Mosque was raised inside the complex by reusing the material of the temples.

WHAT ASI IS SAYING?

At Tuesday’s hearing, the ASI opposed the plea, arguing that the mosque’s character was frozen after it came under the protection of the Ancient Monuments and Archaeological Sites and Remains ( AMASR ) Act, 1958. In a reply filed Monday, it stated that even though architectural images of Hindu and Jain deities were used in the construction of the complex, Revival of worship cannot be allowed there as it was ” not practiced at the time of protection of the monument “.  In another language, ASI said Qutub Minar is Not A Place Of Worship.

” A fundamental right cannot be availed in violation of any status of the land, ” it said. On November 29, 2021, a civil judge, while dismissing the plea, observed that wrongs committed in the past ” cannot be the basis of disturbing ( the ) peace of our present and future “.

Advocate Hari Shankar Jain, who addressed arguments on behalf of the petitioners, said that the Quwwat – ul – Islam mosque was constructed after 27 temples were demolished and that no prayers have been offered at the mosque in the past 800 years. Stressing that the petitioners just wanted the restoration of deities and the conduct of puja, and not ” demolish anything “, he submitted: ” When there was a temple in existence much before the mosque, why can’t it be restored? “

The judge said: ” What is the legal right? Assuming it was invaded, demolished, or some structure raised, let us assume it was not being used by Muslims. The important question is, can you now claim it to be restored under what basis? Now you want this monument to be turned into a temple calling it restoration, my question is how would you claim that the plaintiffs have a legal right assuming it existed about 800 years back? ” The court said: ” Deity is surviving for the last 800 years without worship. Let it survive like that. “

The court also said the ” existence of the idol is not in dispute ” and asked if the ” right to worship is an established right, whether it’s a constitutional or any other right, and what remedies, if any, are available with this right? ” Jain told the court that he has the right to worship under Article 25 of the Constitution.

Gupta rebutted this, saying: ” Yes, the fundamental right exists but it’s not absolute and therefore ( the ) court has found that this right is not available in this case. ” Because Qutub Minar is not a place of worship.

VIOLATION OF AMASR IN J & K

Concerns over the AMASR Act getting violated were also raised when recently J & K Lt governor Manoj Sinha performed a puja at the ruins of the eighth-century Martand Sun Temple in Anantnag. Such concerns are also being raised in the context of disputes such as Gyanvapi, and Mathura Eidgah making it to the courts. Both are not protected by ASI.