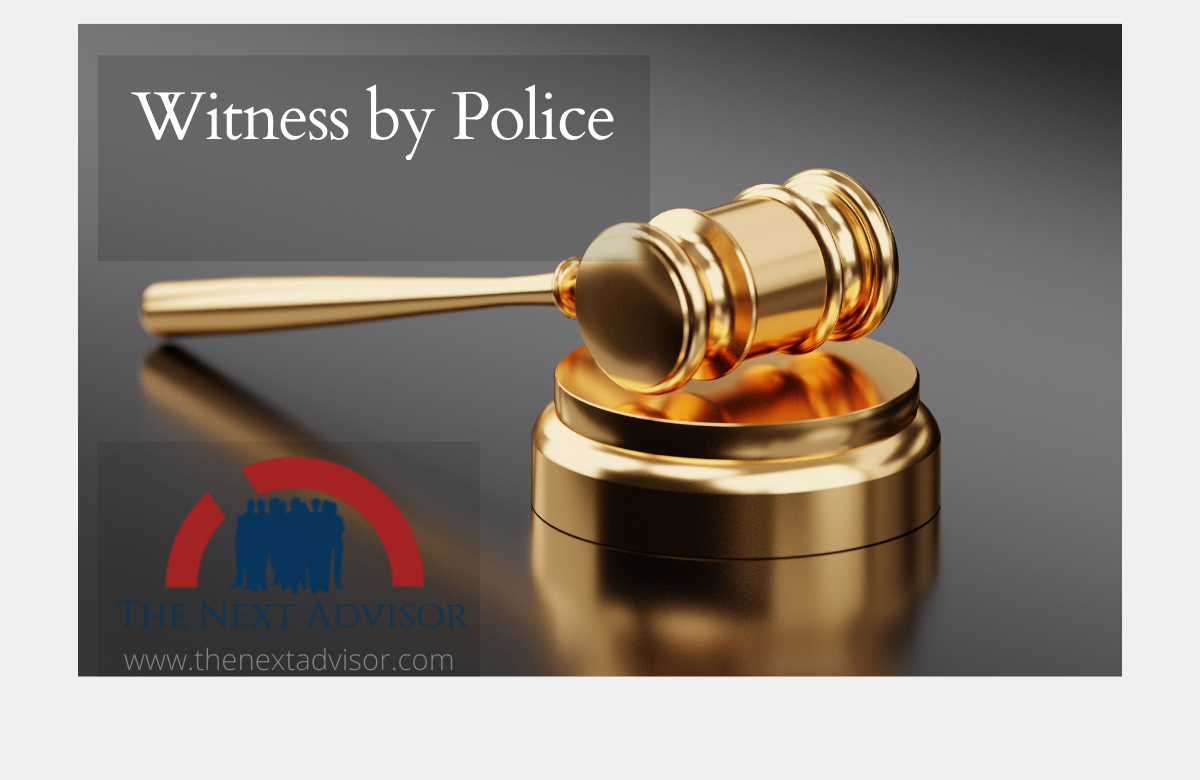 To understand the Examination of witnesses by Police first thing is very important to understand here that at very first stage Police is the only one who examines the witness.

(1) Any police officer making an investigation under this Chapter, or any police officer not below such rank as the State Government may, by general or special order, prescribe in this behalf, acting on the requisition of such officer, may examine orally any person supposed to be acquainted with the facts and circumstances of the case.

(2) Such person shall be bound to answer truly all questions relating to such case put to him by such officer, other than questions the answers to which would tend to expose him to a criminal charge or a penalty or forfeiture.

(3) The police officer may reduce into writing any statement made to him in the course of an examination under this section; and if he does so, he shall make a separate and true record of the statement of each such person whose statement he records.

It is a circumstance that will have to be taken into account to consider whether the evidence was given by them before the Court can be relied on.

Delay of few hours, simpliciter, in recording the statements of eye-witnesses may not by itself amount to a serious infirmity in the prosecution case. But it may assume such a character if there are concomitant circumstances to suggest that the investigator was deliberately marking time to decide about the shape to be given to the case and the eye-witnesses to be introduced. Normally, in a case where the commission of the crime is alleged to have been seen by easily available witnesses, a prudent investigator would give to the examination of such witnesses prudence over the evidence of other witnesses.

The words any person in Section 161, would include persons then or ultimately found accused familiar with the facts. The testimony of a witness does not become untrustworthy, merely because there is a delay in the examination of a witness by the Investigating Officer-The question of delay in examining a witness during the investigation is material only if it is indicative and suggestive of some unfair practice by the Investigating Agency to introduce a got-up witness to falsely support the prosecution case. Therefore, the Investigating Officer must be asked specifically about the delay and the reasons. Evidence of a witness does not become untrustworthy merely because he was examined after delay by the Investigating Officer.? Statements made under Section 161 CrPC, in the cross (counter)-Case not admissible in the present case. If the Court has not put any question to the witness concerning his statement recorded under Section 161 of the Code, it is impermissible for Court to use that statement later even for drawing any adverse impression regarding the evidence of that witness.
Incriminatory and compelled testimony.

Interrogation by Police, right of the accused to silence-extent. The Investigating Officer did not record the statement of the eye-witness ing that it would be the repetition of the same version in the case-dairy. Absence of statement of the witness under Section 161, Cr PC would not cause any prejudice to the accused. Delay in the examination of a material witness by I.O., unexplained and unjustified. The evidence of such a witness is unreliable.

On receipt of information about the occurrence, I.O. reached the spot. recorded the statement of the witness, and took other investigation steps, statement of the witness under Section 161, Cr PC, cannot be treated FIR Needless to stress that the statement recorded under Section 161 of the Code of Criminal Procedure cannot be used for any purpose except to contradict a witness in the manner prescribed in the proviso to Section 161(1) and that the First Information Report is not a substantial piece of evidence.

There is no special rule or direction provided in Cr PC, affording guidance for Police Officers in recording statements of witnesses, and usually what is done is that when a succeeding witness gives practically an identical story as to what a previous witness has stated, it is a matter of common knowledge that the words used by the Police Officer would be similar or identical. The recording of a joint statement of the examination of witnesses by the Investigating Officer is clearly in contravention of Section 161(3) and must be disapproved but that would not render their testimony in Court inadmissible when there is no bar to the reception of their testimony.