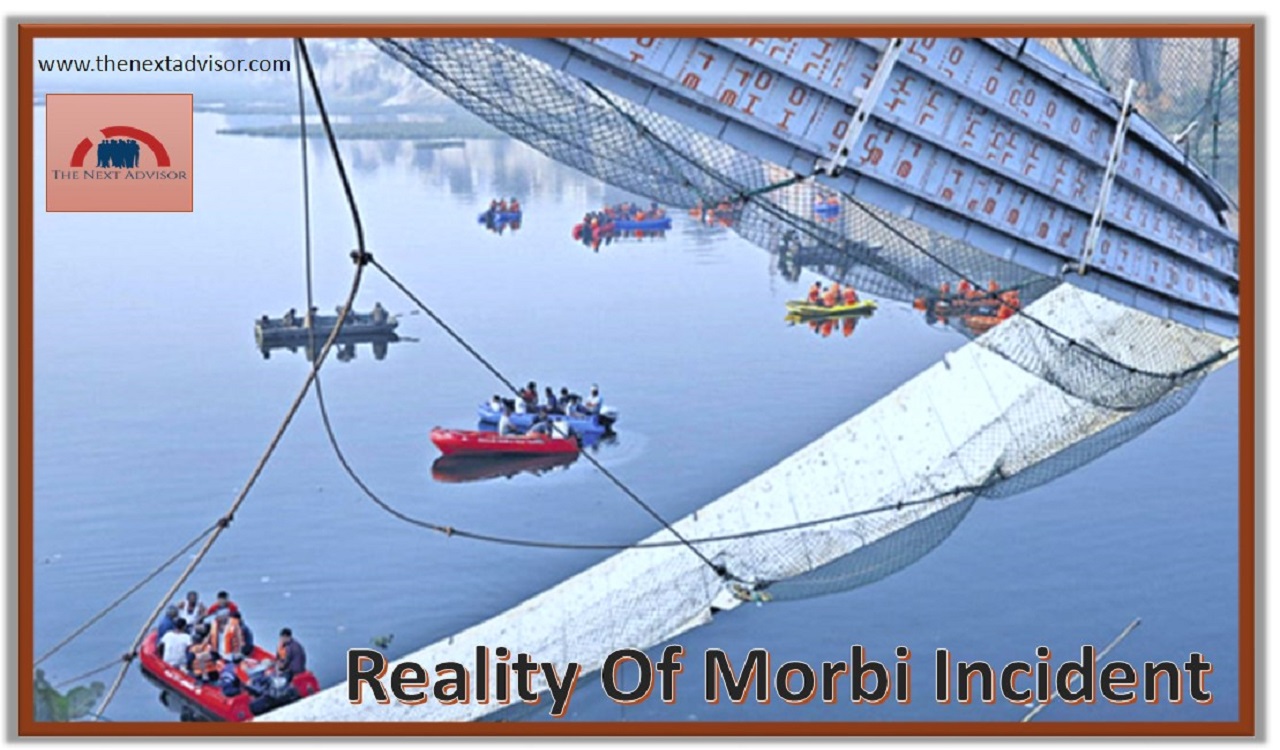 Hello friends, I am going to show you the Reality Of Morbi Incident.

A bridge collapsing due to corruption is such a common event that it is repeatedly mentioned in films as well. This makes it necessary to examine these incidents in detail. The Machchhu River flows through Gujarat, On it, this 230 ft long, 4 ft wide bridge was constructed. This was commonly known as Jhuto Pul. It was commissioned by Morbi’s former ruler Sir Waghji Thakor. Between 2008 to 2018, the Oreva Group was given the contract to out, and manage the bridge. Following this, on 3rd June 2020, the Oreva Group presented a new contract for a tenure of 15 years, and allegedly, a full-fledged renovation of the bridge was a part of the contract. But this was during the pandemic, and the bridge was closed down due to the lockdowns.

1.5 years later, in March 2022, this renovation and maintenance agreement was signed. Notably, this agreement is the upper limit on the number of people that can get on the bridge together. For repairing the bridge, the company had to bear all expenses. They were given 8-10 months to repair the bridge. But apparently, the repairing went by rapidly, and the bridge was opened 7 months later. We later found out, that charged an rs. 2 premium from the visitors. The Morbi police claim that the company hastened the reopening of the bridge, to cash in on the Diwali crowd. The overcrowding raised a big question too.

Friends, the allowable capacity was never calculated. Investigations have revealed that the security guard and the ticket clerks weren’t even trained properly. Apart from these, there were no emergency rescues, no evacuation plan, no life-saving equipment, and no lifeguards either. The Municipality was responsible to issue a Fitness  Certificate. But had the company won any quality checks on whether the bridge was properly repaired or not? Later we found out that the renovation work was subcontracted by Oreva to another company.

This company also had no expertise in handling such projects. They were paid rs. 2.9 million to repair the bridge. This raises another shocking question here. Oreva had claimed to have a budget of rs. 20 million. But in this sub-contract, only rs. 2.9 million were mentioned. And in the police investigation, it was found that only rs. 1.2 million were spent. After these questions were raised, the police arrested 9 people. They are accused under several sections of the IPC. But think about it, When Jay Sukh Patel publicly announced the reopening of the bridge on 24th October, if the Municipality was aware that no Fitness Certificate was issued, were they sleeping since then? Why didn’t they prevent the bridge from being open to the public? People were visiting the bridge for 4 days, why was tourist entry not banned then?