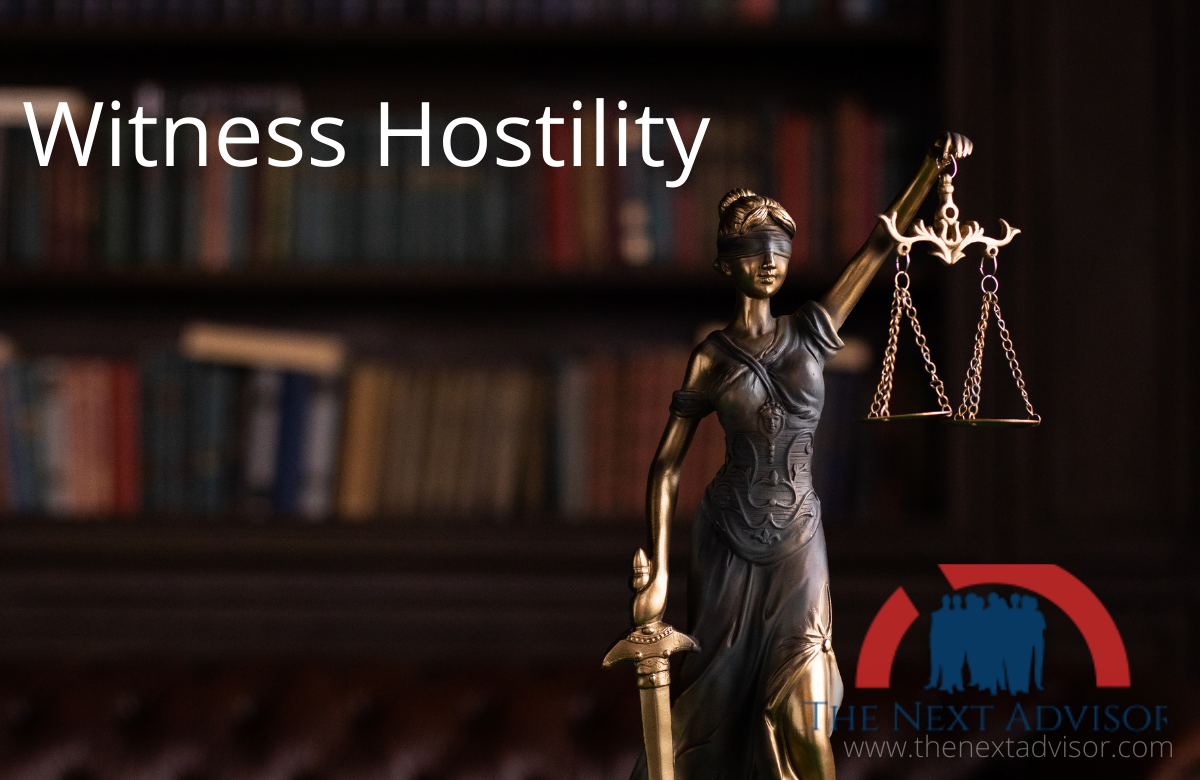 Hostility is a menace. Witnesses who support the prosecution story during a criminal investigation do not like to turn up before a criminal court to depose the true story. Even if they appear before the Court they do not intend to put before the Court the true picture of the prosecution due to fear, relations, and closeness. Let us first consider the actual meaning of the word ‘ hostile because in the Indian Evidence Act, 1872. Nowhere hostile word is used nor is described in respect of hostility.

Hostile means adverse, unfavorable or alien. These words have been borrowed from British law. In a criminal trial when a prosecution witness is summoned to produce evidence, he appears before the Court but does not confirm his previous evidence/statement recorded or collected by the investigating agency. He is called adverse witness, hostile witness, or unfavorable witness, Section 154 of the Indian Evidence Act, 1872 enumerates a witness who is cross-examined by his own party/prosecution with the kind permission of the Court Section 154 of the Indian Evidence Act, 1872 enumerates as follows 154. Question by party to his own witness.

The court may in its discretion, permit the person who calls a witness to put any questions to him which might be put in cross-examination by the adverse party.

The law is now well settled that merely because the witness is declared as a hostile witness, the whole of his evidence is not liable to be thrown away.

Moreover, in a criminal trial, a witness is declared hostile with the permission of the Court when he does not confirm his previous statement but such declaration is not the requirement of law or Section 154 of the Indian Evidence Act, 1872, Thus it is manifest that the prosecution can put any questions which are put by a defense counsel after getting the permission of the Court. And a defense counsel in a cross-examination asks questions that are closely linked to Sections 145, 146, 153, and 155 of the Indian Evidence Act, 1872.

The moot problem to be considered is that how can we curb acquittal of a criminal case? What would be the result of such evidence? What is the evidentiary value of such evidence? Whether we can get the conviction of an accused from such evidence?. In 1926 Justice Mukherji held in Khijruddin v. Emperor, ” When a witness who has been called by the prosecution is permitted to be cross-examined on behalf of the prosecution under Section 154 of Evidence Act, the result of that course being permitted is to discredit that witness altogether and not merely to get rid of part of his testimony.

This thought /ruling also got conformation from Apex Court in 1975 in Jagir Singh v. State (Delhi Administration), “It is well settled that when a witness who has been called by the prosecution, is permitted to be cross-examined on behalf of the prosecution, the result of all course being adopted is to discredit that witness altogether but not merely to get rid of a part of his testimony.

It means that adverse witness does not deserve to be trusted and providing an opportunity to the prosecution to cross-examine that witness, is to stop the accused from availing any benefit. But his testimony may be used for the benefit of the prosecution sometimes a witness supports his previous statements or evidence collected by investigating agency and in his cross-examination becomes unfavorable.

To confine the operation of Section 154, Evidence Act to a particular stage in the examination of a witness is to read words in the section which are not there. ” Thus a witness may be cross-examined at any stage of examination by his own party who calls him with the permission of the Court when he is adverse.

Whenever does the prosecution assumes the whole character of defense counsel what will be the value of that testimony? In this respect our Apex Court held K Thevur v. State of Tamil Nadu, a hostile witness may not be rejected outright but the Court at least to be aware that prima facie a witness who makes different statements at different times has no regard for truth.

Merely because the Court gave permission to the public prosecutor to Cross-examine his own witness describing him as hostile does not completely efface his evidence. The evidence remains admissible in the trial and there is no legal bar to base conviction upon the testimony of such witnesses. And this view got confirmation in Madhukar Damu Patil v. State of Maharashtra, even confidence. a portion of the testimony of a hostile witness can be relied upon if it inspires confidence.

Now it stands clear that if a testimony of a hostile witness inspires confidence or evolves presumption to the guilt of the accused a conviction may be awarded by the Court. As it is advertised by the Supreme Court, Gura Singh v. the State of Rajasthan. ” It is a misconceived notion that merely because of a witness is declared hostile his entire evidence should be unworthy of consideration In a criminal trial where a prosecution witness is Cross-examined and contradicted with the leave of the Court by the party calling him for evidence cannot as a matter of general rule, be treated as washed off the record altogether.

It is for the Court of the fact to consider in the case whether as a result of such cross-examination and contradiction the witness stands discredited or can still be believed in regard to any testimony, In appropriate cases, the Court can rely upon the part of the testimony of such witnesses if that part is found to be creditworthy.