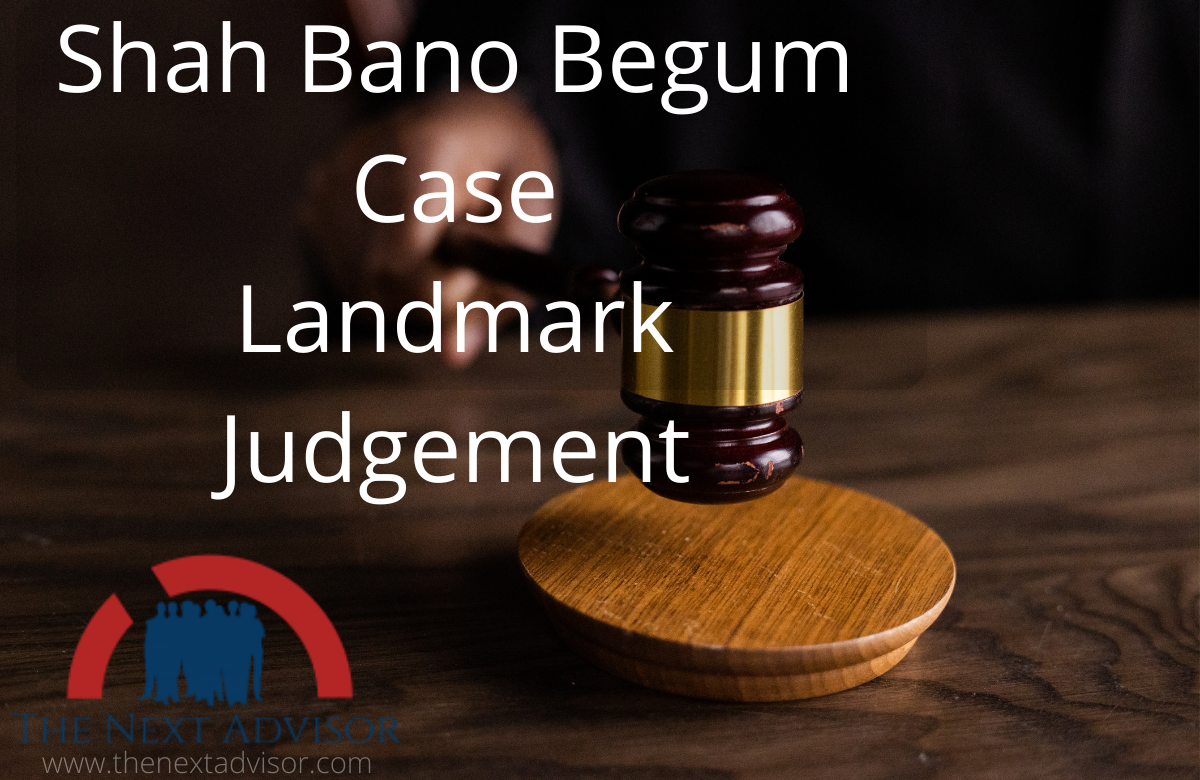 Hi, today I will introduce to all of you the very famous case which is Mohd. Ahmed Khan VS Shah Bano Case. I will introduce it with some very important points. After reading these points you will become totally knowledgeable about the main points of this landmark Judgement.

Commonly referred to as the Shah Bano Case, was a controversial maintenance lawsuit in India, in which the Supreme Court delivered a judgment favoring maintenance given to an aggrieved divorced Muslim Woman.

>In 1932, Shah Bano was married to Mohd. Ahmed Khan, who was a renowned lawyer in Indore.

> After 14 years of their marriage in 1946, Shah Bano’s Husband married another woman who was younger than him. In 1975, when Shah Bano was of 62 years, she was disowned by her husband and was thrown out from her matrimonial home along with the children.

> In April 1978, she brought an appeal under Section 125 of Code of Criminal Procedure, 1973 (CrPC) in the presence of the Judicial Magistrate of Indore. Shah Bano filed this suit in 1978 because her husband has abandoned her from the maintenance of Rs.200 per month which he guaranteed to give.

> In November 1978, Ahmed khan gave divorce to his wife Shah Bano by articulating or uttering “Triple Talaq”, and it was irrevocable

>Ahmed Khan filed a petition to appeal before the Supreme Court and the argument after the divorce he cannot keep any form of alliance or connection with his divorce wife because it is not allowed by Islamic law or Islam and is “Haram” and hence he is not legally responsible to maintain her wife.

1. Whether Section 125 of the Code of Criminal Procedure is concerned with Muslims or not.

2. Whether the amount of Mehr given by the on divorce is adequate to get the husband rid and is liable to maintain his wife or not.

3. Whether Uniform Civil Code applies to all religions or not.

* On 3rd February 1981, the Supreme Court gave the conclusion in this case and banished the plea of Mohd. Ahmed Khan and validate the verdict of the High Court. The Court held that Section 125(3) of Code of Criminal Procedure solicited to Muslims too, without any sought of discrimination.

Supreme Court concluded that “there is no conflict between the provisions of section 125 and those of the Muslim Personal Law on the question of the Muslim husband’s obligation to provide maintenance for a divorced wife who is unable to maintain herself.

Thus in the end, after a very long procedure court finally concluded that the husband’s legal liability will come to an end if the divorced wife is competent to maintain herself. 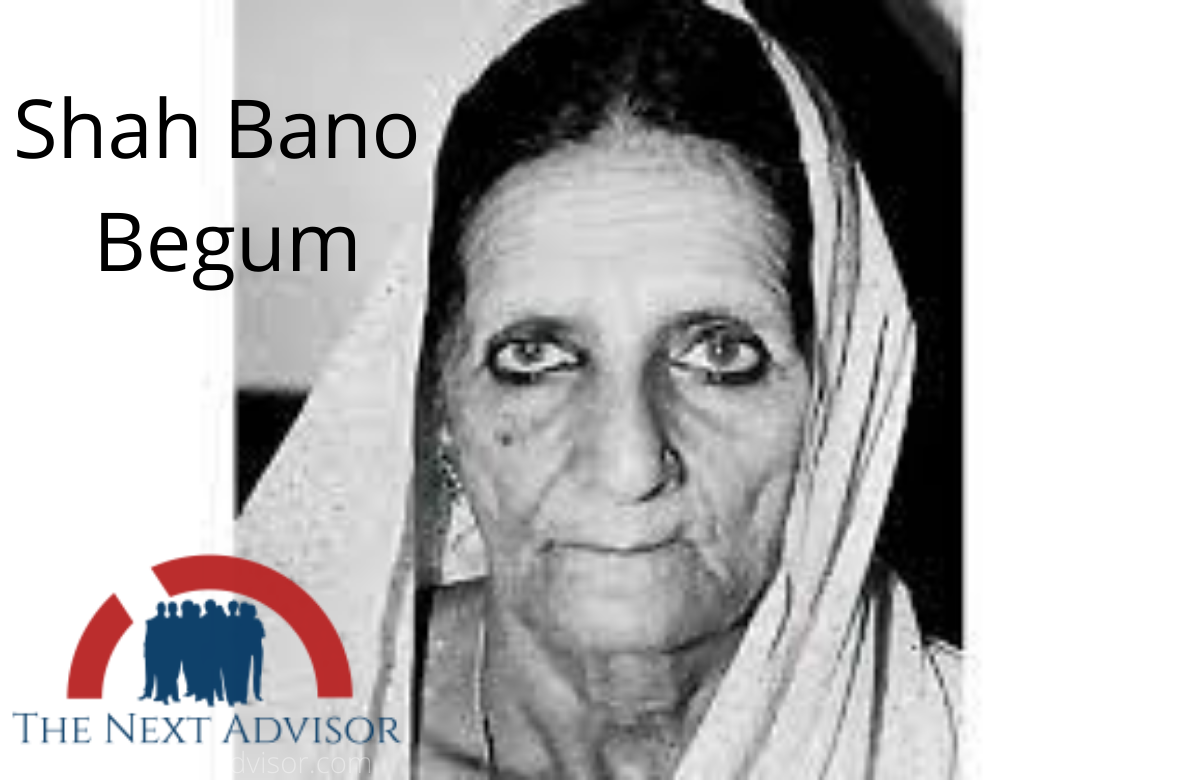 125. Order for maintenance of wives, children, and parents.

(a) his wife, unable to maintain herself, or

(b) his legitimate or illegitimate minor child, whether married or not, unable to maintain itself, or

(c) his legitimate or illegitimate child (not being a married daughter) who has attained majority, where such child is, because of any physical or mental abnormality or injury unable to maintain itself, or

<(b) ” wife” includes a woman who has been divorced by, or has obtained a divorce from, her husband and has not remarried.

(3) If any person so ordered fails without sufficient cause to comply with the order, any such Magistrate may, for every breach of the order, issue a warrant for levying the amount due in the manner provided for levying fines, and may sentence such person, for the whole or any part of each month’s allowances remaining unpaid after the execution of the warrant, to imprisonment for a term which may extend to one month or until payment if sooner made.

Provided that no warrant shall be issued for the recovery of any amount due under this section unless the application is made to the Court to levy such amount within a period of one year from the date on which it became due.

Effects of this case:-

It was not the first case in which the wife claimed maintenance. It became a landmark judgment, Because of this case religious-based politics was started between BJP and Congress. And it was a very crucial case for India. Shah Bano is the Idol of Thousands of Muslim Women.

Muslim Personal Laws mandate husbands to give alimony to estranged wives only during the “Iddat Period”.

What is the Iddat Period:- Iddat is the waiting period that a  Muslim woman has to observe after the death or divorce of her husbandIddat period refers to a period of 3 Months POST-TALAQ, but in the case of pregnancy, it extends till childbirth.

Ahmed Khan’s stance was supported by the All India Muslim Personal Law Board (AIMPLB). AIMPLB also argued that interference in such matters is a violation of the Muslim Personal Lse (Shariat) Application Act, 1937. Muslim Laws, Shariat Courts dedicated the judgment as per the Shariat provisions.

Remarks of the then Y.V. Chandrachud (Chief Justice of India)focused upon the need for progressiveness in personal law. Section 125 was enacted as a remedy for that Section of people who cannot maintain themselves. Religion is not affected by the motive of Section 125 of CrPc. The CJI also stressed the need of connecting religion with morality. The Supreme Court delivered judgment in the favour of Shah Bano. But Shah Bano withdraws the case due to political and religious pressure.

The aftermath of Shah Bano Verdict:-

Shah Bano Judgement recognizes the rights of equality and dignity of women. Supreme Court had also stressed the need to enact a Uniform Civil Code. Uniform Civil Code relates with a single law to deal with personal affairs of all religious communities. Uniform Civil Code is also mentioned in Article 44 under the Directive Principles of State Policy. 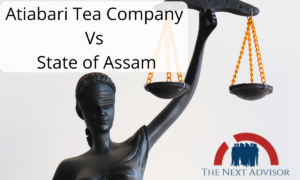